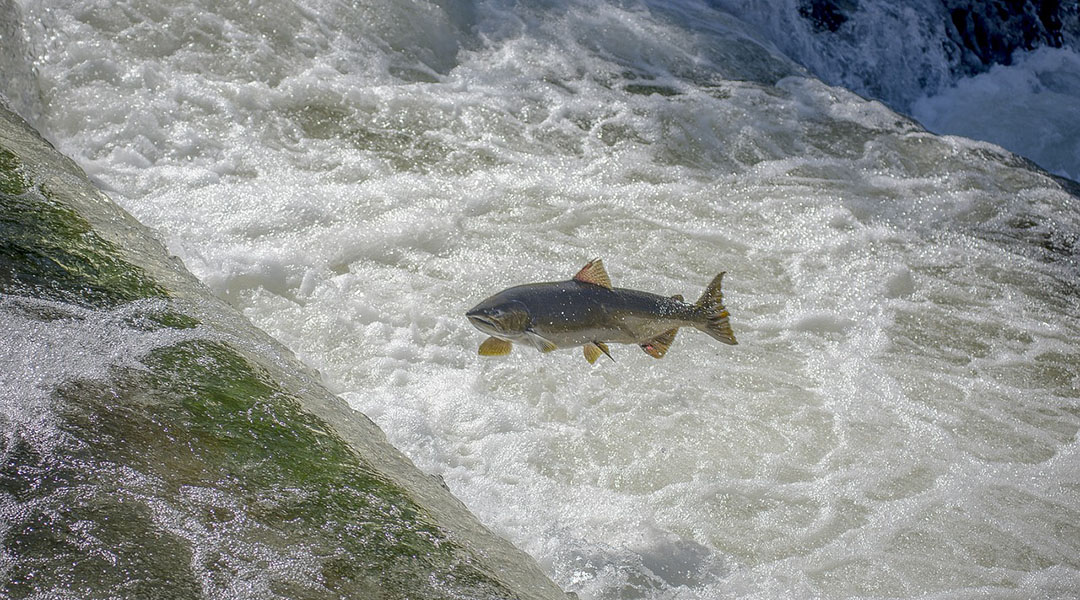 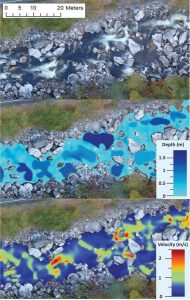 Raymond Timm of Siskowet Enterprises and researchers from Cramer Fish Sciences (CFS) and Northwest Hydraulic Consultants (NHC) present findings from a study conducted in collaboration with the Nez Perce Tribe, demonstrating the use of aerial drone photography, hydraulic modeling, and simulated rock blasting, to evaluate velocity barriers that are hypothesized to emerge under moderate flow conditions and prevent upstream steelhead (Oncorhynchus mykiss) migrations within a section of the South Fork Clearwater River, Idaho.

After their initial investigation, the researchers determined whether it may be possible to move or remove some of the large boulders in this section of the river to ameliorate hydraulic barrier setup.

Using a small unmanned aerial system, the authors collected overhead photos of the reach that were then stitched together as a photomosaic using structure-from-motion (SFM) technology and then used to develop a 3D model of channel elevation. The resolution of this elevation model was exceptionally high with approximately 10 cm2 grid cells. Importantly, this grid size is biologically relevant as pixels within the mesh are almost an order of magnitude (9-fold) shorter than the mean length of steelhead that pass through the reach (90 cm).

Next, using their elevation model, the researchers modeled 2D water velocities (hydraulics) through the reach across a range of flow conditions to estimate the magnitude of critical flows predicted to create conditions that prevent steelhead from passing. Their findings suggest that a number of patches with sufficiently high velocities to impede passage are generated at relatively low flows and true velocity barriers emerge at moderate flows that occur at least once annually (e.g., spring freshet).

The elevation model was then manipulated to explore the predicted hydraulic effects associated with hypothetical mitigation scenarios such as moving or removing large boulders within the reach using precision rock blasting.

After modifying the elevation model to reflect these changes, the hydraulic model was re-run to estimate the number, extent, and intensity of hydraulic barrier emergence, and then compare changes to the status quo across a range of flow conditions. From this in silico rock blasting exercise the team concluded that it should be possible to reduce the intensity of the barriers that emerge at moderate flows within the study reach.

Whether or not mitigation work proceeds is a separate issue that involves regional stakeholders, politics, and environmental impact assessments; however, it appears possible to reduce the intensity of hydraulic barriers that currently impede or prevent adult steelhead from migrating through this site to spawn upstream.

Water, reciprocity, and the anthropocene in the Himalayas
What do carbon capture and beer bubbles have in common?
Modeling Mount Vesuvius' next eruption
Eco-friendly perovskite solar cells made from peppermint oil and walnut aroma