Marine environments, and seawater in particular, are extremely corrosive. Effective corrosion protection for marine constructions is an important area of development. 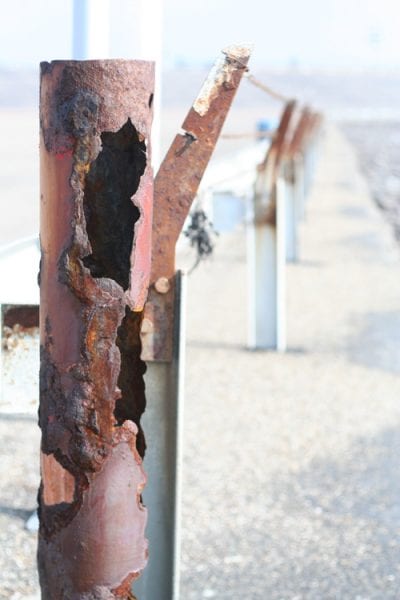 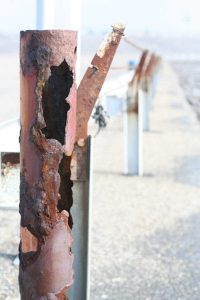 Seawater in the world’s oceans has a salinity of between 3.1% and 3.8% containing sodium (Na+) and chloride (Cl−) ions. It is an electrolyte with strong corrosiveness and with a large amount of dissolved oxygen and marine organisms which decompose marine vehicles, equipments, and oil exploration platforms to different degrees.

Because of this, much work has been done over the past few years to combat the decomposition of materials used on the sea. One important breakthrough came from the Leibniz Institute for New Materials in Saarbruecken/Germany, who developed a new composite material that prevents corrosion of metals even under extreme conditions in an environmentally friendly way.

The protective coating is only a few millimeters thick and prevents the penetration of gases and electrolytes. It protects from corrosion caused by aggressive aqueous solutions, such as salty solutions or aqueous acids.

After thermal curing, the composite adheres on metallic substrate; it is abrasion and impact resistant. For this purpose, it also withstands a highly mechanical load. The new material can also, therefore, be used with sand or mineral dust without wear and tear. The composite can be deposited by spraying or with other wet-chemical processes and cured at temperatures from 150 to 200°C. It is suitable for steel, metal alloys, or copper. Panels, tubes, cogwheels, tools, or engine parts in any shape can be coated. The special mixture consists of a solvent, a binder, and nanoscale platelet-like particles, but no chrome VI or other heavy metals.

However, despite the great potential of this system, epoxy coatings remain the most commonly used corrosion protection, because of their good anti-corrosion performance and chemical resistance. They have excellent adhesion to many substrates and good flexibility. Furthermore, epoxy coatings can be solidified to paint film of different features and properties with multiple curing agents. However, their use is being restricted because of increasing environmental concerns.

To evaluate anti-corrosion performance of such coatings in different marine environments, offshore samples have to be exposed. But offshore samples are disadvantageous because of heavy workload as well as difficult maintenance and observation. The reliability of field tests decreases due to loss of samples and data-recording abortion caused by unexpected typhoon and wave surging. To overcome the disadvantages, the Chinese scientists used a marine corrosion simulation apparatus. They showed that the simulation test apparatus can replace offshore field tests and better serve the need of coating evaluation. It worked reliably and simulated realistically the different corrosion environments existing in offshore field, such as splash, tidal, and immersed zones.

Tiger shark migration altered by ocean warming
Inspired by the pufferfish, this hydrogel purifies water using nothing but sunlight
Getting renewable methanol on the high seas
Early Earth may have been a waterworld