Entrance ticket for the Quantum World

The field of quantum simulations leads to the exciting adventure of describing and understanding the quantum world better than ever. 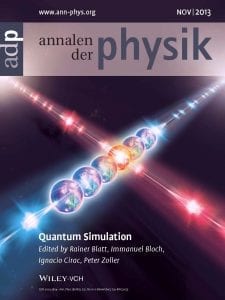 The field of quantum simulations leads to the exciting adventure of describing and understanding the quantum world better than ever.

Quantum many-body systems appear in different branches of physics and chemistry. As the number of parameters defining their quantum states grows exponentially with the number of constituents, even with the help of the most powerful supercomputers, problems involving relatively small numbers of subsystems cannot be solved. Simulation of quantum many-body systems is still a tremendous challenge.

The latest Topical Issue of Annalen der Physik is dedicated to the exiting topic of “Quantum Simulation”. Four renowned scientists act as guest-editors: Rainer Blatt and Peter Zoller both are Scientific Directors at the Institute for Quantum Optics and Quantum Information (IQOQI) of the Austrian Academy of Sciences and hold chairs at the University of Innsbruck (Austria) – Zoller for Theoretical Physics and Blatt for Experimental Physics, where he works on quantum information processing with trapped ions. Immanuel Bloch and Ignacio Cirac do their research at the Max Planck Institute of Quantum Optics in Munich (Germany). Bloch is scientific director of the Quantum Many-Body Systems Division there and holds a chair in quantum optics at the University of Munich. Cirac leads the Theory Division of the Max-Planck Institute, investigating quantum information theory and quantum optics.

In their editorial, the guest-editors refer to Richard Feynman who already proposed in 1981 to use quantum systems (as opposed to classical computers) to perform quantum simulations and in this way to circumvent the need to store and compute a colossal number of parameters, necessary to describe the pertaining superpositions – a visionary idea at that time. Today, scientists are able to control and manipulate various quantum systems with unprecedented precision. They arrange quantum subsystems in different geometries, modify their interactions, and detect them. “This allows us to engineer Hamiltonians and emulate systems displaying some of the most intriguing quantum phenomena”, the editors point out. “The degree of control achieved in the experiments has enabled the observation of mind-boggling quantum effects, related to the superposition principle or to entangled states, and their disappearance due to decoherence.”
In fact, the Nobel Prize 2012 has been awarded to two scientists, S. Haroche and D. Wineland, for such ground-breaking experiments. These two researchers open up the round of fascinating review and research papers of the special issue, describing their foundational work.

Three invited review papers are contained as well. The first is about recent theoretical proposals to use cold atoms in optical lattices to simulate lattice gauge theories of the sort that appear in high-energy physics. The second covers both theoretical proposals and experimental demonstrations of cold-atom systems to simulate the physics of matter in the presence of gauge fields, displaying so-called topological phenomena. The third one contains an extensive overview and new proposals to perform a broad range of quantum simulations using quantum dot systems. Six original papers complete the topical issue.