hnRNPA1 is involved in multiple biological processes within the cell nucleus and cytoplasm. 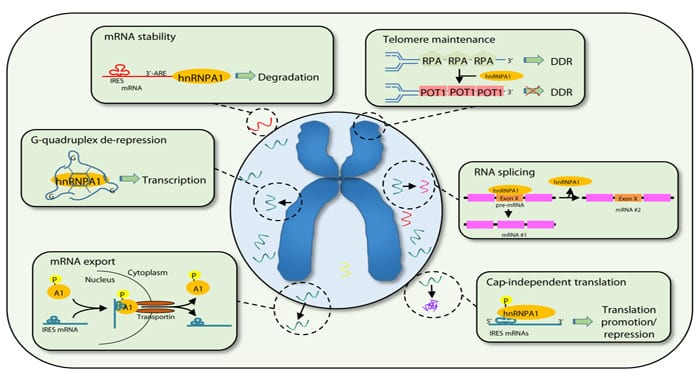 Heterogeneous nuclear ribonucleoproteins (hnRNPs) are involved in a large number of biological processes that regulate cellular homeostasis. hnRNPA1 is the most abundant and ubiquitous member of this family. It is highly conserved between species, reflecting its central importance in the processing of mRNAs, leading to selective gene expression and protein translation. However, as discussed in a review in WIREs RNA, results from our lab and others have highlighted roles for hnRNPA1 beyond the regulation of homeostasis, as its overexpression promotes a pro-tumorigenic cellular program that fuels cancer progression.

Indeed, hnRNPA1 is overexpressed in various tumour types where it regulates multiple hallmarks of cancer. It is involved in the maintenance of telomeres, the terminal ends of chromosomes that control the number of cell divisions a normal cell can undergo. Conservation of telomere length is a pre-requisite of cellular immortalisation and hnRNPA1 overexpression promotes malignant transformation through the activation of Telomerase, the enzyme complex that lengthens telomere ends. hnRNPA1 then stimulates cell cycle progression and aerobic glycolysis to support tumor growth by increasing the expression of key molecular players like cMYC, CYCLIND1 and PKM2. Moreover, hnRNPA1 facilitates the development of drug resistance and metastasis. This is achieved through the control of the nucleo-cytoplasmic shuttling and translation of pro-survival mRNAs such as BCLXL and XIAP and of the splicing of genes like CD44 and SRSF1, respectively.

Overall, the involvement of hnRNPA1 in cancer is only just emerging, and a better understanding of factors regulating the activity of this protein may highlight previously unforeseen therapeutic opportunities. Indeed, protein-protein interactions and post-translational modifications, such as phosphorylation, sumoylation, or ubiquitylation, have been shown to modulate its function. Targeting interacting partners of hnRNPA1 or upstream signaling events responsible for its post-translational modifications may therefore simultaneously impact several hallmarks of cancer.

Text and image contributed by the authors.