Technique finds new use in patterning polymers to control cells and proteins. 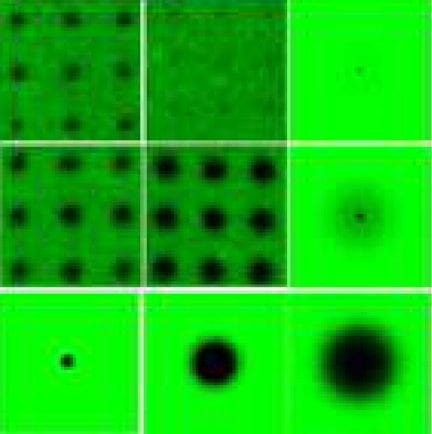 Electron-beam lithography is well known in the semiconductor industry, where its high resolution, simplicity, and avoidance of the need for masks make it a technique of choice for manufacturing. However, as discussed in a recent Review article in the Journal of Polymer Science: Polymer Physics by Joerg Lahann and Aftin Ross of the University of Michigan, the technique is finding a new application in the patterning of surfaces for the control of cell behavior. Now, writing in the same journal, Matt Libera and colleagues provide new insight into how the method can also be fine tuned to control protein—surface interactions.

As is becoming well known, and as Lahann and Ross discuss in their article, cells’ adhesion, proliferation and differentiation are radically impacted by both chemical and physical cues in their environment. In particular, “a diversity of cell behaviors ranging from cell orientation, cell motility, surface antigen display, activation of tyrosine kinases, and modulation of intracellular signaling, are found to be associated with geographic changes on the nanoscale”, explains Lahann. These findings are leading to new approaches to control cell behavior in biomaterials.

Whilst electron beam lithography has already been explored for the patterning of common water-soluble polymer precursors often used in biorelevant patterning applications such as poly(ethylene glycol) (PEG), far more is known about how electrons interact with more common polymer resists used for traditional patterning. Libera and colleagues explore some of the parameter space for the use of PEG as a biointeractive electron-beam resist in detail, and examine how this patterning affects protein adsorption.

They find that electron beam patterning of PEG creates microgels on the substrate surface. Whilst these microgels differ depending on the incident irradiation and dose, they all have internal structure: a heavily crosslinked core, surrounded by a more lightly crosslinked “near corona” and a “far corona” that can extend hundreds of nanometers or even micrometers.

The core is so heavily crosslinked and modified from the natural PEG state that it no longer has the polymer’s anti-fouling properties. However, the core is usually shielded from protein interaction by the near corona. This first shell, say the authors, “can vary from a monolayer to many tens of nanometers”, and most of the polymer—protein interaction is in this region. The far corona is essentially PEG grafted to the substrate surface by backscattered electrons interacting with the polymer, which creates a far-ranging protein-repulsive surface.

A better understanding of the effects of electron-beam irradiation on these types of polymers can enable fine-tuning of surfaces for applications in the future. “These findings can help guide the choice of irradiation conditions to most effectively modulate protein—surface interactions via PEG microgels patterned by electron-beam lithography”, says Libera.