A new strategy to produce heteroatoms-doped GQDs as photocatalysts with control over heteroatom types, constitution and content.

Due to the limited reserves of fossil fuels, and increasing environmental problems, we are forced to develop efficient ways to convert solar energy into chemical or electrical energy as an alternative source of energy. This energy conversion process always requires effective photocatalysts to promote the desired reactions under sunlight in a sustainable manner. Among a variety of photocatalysts –  graphene quantum dots (GQDs), which are semiconducting graphene nanosheets with a diameter smaller than 10 nm, have recently emerged as a promising candidate photocatalyst for the conversion of solar energy into other useful alternatives. However, the photocatalytic activity of GQDs must be enhanced, which can be accomplished by tailoring their atomic structures to increase the conversion efficiency of solar energy. Unfortunately, there is a lack of studies to understand the effect of heteroatom types, constitution, and content on the photocatalytic activity of GQDs. In particular, there have been few systematic approaches to fine-tune heteroatom types, their well-defined constitution, and content on GQDs. 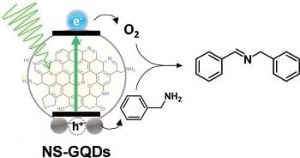 Jong-Ho Kim and his co-workers, from Hanyang University (ERICA) in the Republic of Korea, present a new strategy to produce heteroatom-doped GQDs as photocatalysts with control over heteroatom types, constitution and content. They employed a single precursor-based synthetic method to synthesize nitrogen/sulfur-codoped GQDs (NS-GQDs) and nitrogen-doped GQDs (N-GQDs) under microwave irradiation. This brand-new approach enables them to effectively control the dopant types, structures and content of GQDs, which leads to the significant enhancement of their photocatalytic activity in the oxidative coupling reaction of various amines under visible light. According to the experimental results, NS-GQDs exhibit much higher photocatalytic activity than N-GQDs and oxygen-doped GQDs (O-GQDs) in visible light-driven photocatalysis. In addition, NS-GQDs can be reused, without the loss of their photocatalytic activity, in the oxidative coupling reaction of amines.

The insight into the effect of doping on the photocatalytic activity of GQDs will offer many opportunities for designing new photocatalysts to effectively promote a variety of sunlight-driven reactions, such as hydrogen evolution, CO2 reduction or water/air purification.