Freshwater ecologists are becoming interested in noninvasive surveying techniques, such as ecoacoustics, to gather crucial data and plan conservation efforts. 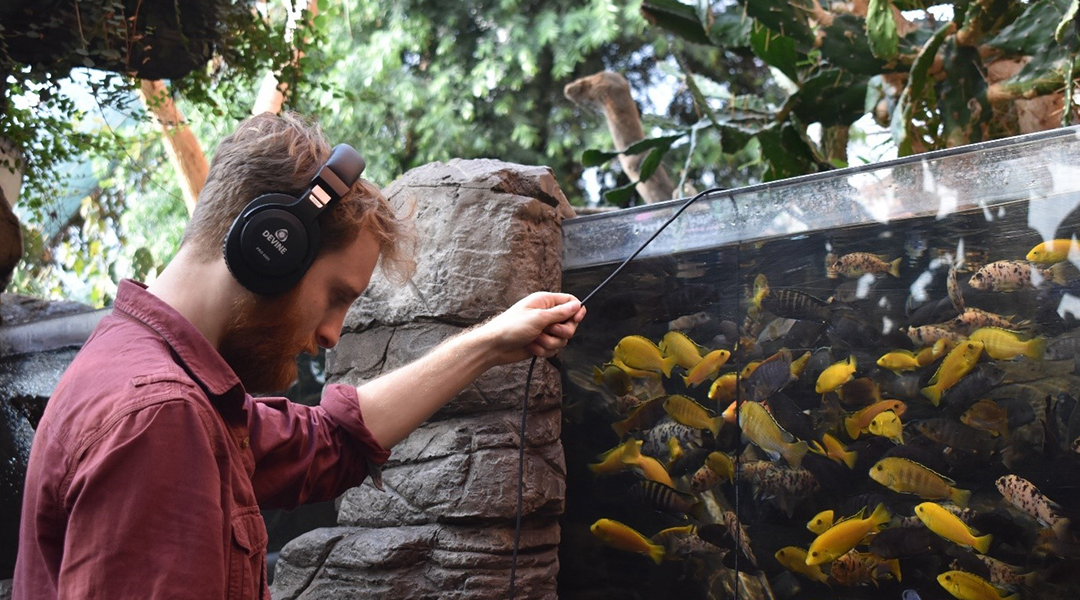 Water is crucial for the survival of all life and a diversity of species can be found in freshwater habitats. At the water’s edge, the boundaries between the terrestrial and aquatic worlds bleed gradually into each other, producing a range of microhabitats that semi-aquatic species such as frogs and birds inhabit. An even greater number of species occupy ponds dominated by water plants, or the rushing rapids of a river’s interior.

Freshwater ecologists have meticulously documented the biodiversity found in and around freshwaters for decades. However, researchers are now beginning to survey and perceive rivers, lakes, and ponds in a totally new way: by listening. This emerging discipline, which seeks to address ecological questions using sound, is known as ecoacoustics.

Lowering an underwater microphone (a hydrophone) into a river and listening is all it takes to reveal an underwater orchestra of sounds produced by frogs, fish, and insects. The largely unexplored acoustic world of freshwaters can tell us a great deal about the condition of an ecosystem, or the species present within it. And surveying in this way means that there is no need to catch animals in traps or nets that could cause harm and that the habitat is not disturbed. Individual species can be identified from acoustic recordings using reference sounds. However, one of the greatest challenges currently in the field of freshwater ecoacoustics is that very few reference sounds exist for freshwater species.

In a recent review published in WIREs Water, a team of researchers from the University of Bristol and Universitaria de Cantoblanco surveyed the scientific literature to determine the range of habitat types and species groups that have been studied using ecoacoustics in freshwater habitats. The team’s findings indicate that fish are the most studied species group, and by contrast, freshwater arthropods, such as mayfly larvae, diving beetles, and crayfish, have received relatively little attention. This is surprising as members of this species group are suspected to produce most of the sounds present in freshwater habitats.

Freshwater arthropods provide an essential role in the foundation of all freshwater food webs. For example, by consuming fallen leaves and other debris from surrounding woodland, mayfly larvae make themselves desirable prey items for fish, such as trout, and ensure the flow of energy from land to water.

Furthermore, some species known to communicate using sound, such as diving beetles, react quickly to changing environmental conditions and are therefore useful biological indicators of ecosystem change. Others, such as the signal crayfish, are highly invasive in Europe and threaten native freshwater species. Monitoring the relative activity and distribution changes of invasive crayfish species using bioacoustics has the potential to support freshwater conservation efforts. In particular, the conservation of the white-clawed crayfish, which has declined by as much as 90% in most parts of the UK.

More research into the sounds freshwater arthropods produce individually, and the soundscapes they generate collectively, will likely provide new perspectives and insights into the health of freshwater ecosystems.  In addition, the study shows that most ecoacoustic studies have been conducted in a laboratory. However, recording in the artificial environment of aquaria can potentially cause certain frequencies produced by an organism to reverberate unnaturally, resulting in inaccurate reference recordings. There is clear need to better understand sound produced by animals in natural lakes, ponds and rivers, especially due to the high levels of background noise present.