The Norwegian company Sintef is testing materialsfor the production of oil and gas at Arctic temperatures between -40 and -60°. 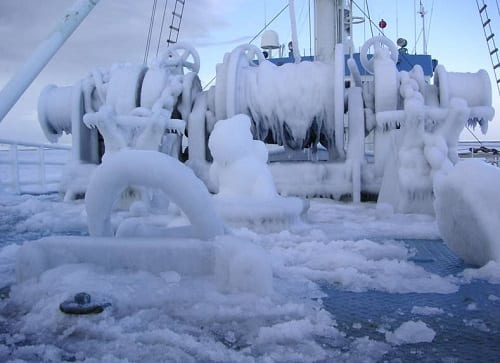 The Snøhvit and Goliat projects are being developed for operation in temperatures of -20°C. In the even harsher conditions further north, steel structures must be able to withstand temperatures as low as -60°C. But our current materials are not tough enough, because when temperatures fall below -20°C, steel becomes brittle and more likely to fracture.

Senior researcher Odd Magne Akselsen is heading a group at Sintef Materials and Chemistry whose aim is to enhance the fracture resistance of construction materials. The idea is to develop precise mathematical models, predict materials properties, and make the necessary modifications.

“There are two factors”, says Akselsen. “The ductility of a material is dramatically reduced when temperatures fall below zero. Moreover, steel plates used in platform construction have to be welded together. After welding, involving high rates of heating and cooling, it becomes easier for cracks to develop.”

He continues: “A single crack can result in brittle fracture by which the material breaks in two in just a couple of seconds. Such fractures are unstable, impossible to predict and very dangerous – potentially resulting in catastrophic accidents.”

In order to avert such hazards, the researchers are carrying out numerous tests and examinations. They are currently testing a new technology that involves measurements using acoustic signals.

“We record a small signal when the crack begins to develop”, says Akselsen. “It’s like the sound of breaking glass. We stop the test at the first indication of a sound, and put the sample under the microscope to find out where the signal has come from.”

It is a major advantage having NTNU participate in the project. Akselsen reveals that a Master’s student has recently succeeded in introducing a crack exactly where she wanted it in a sample of test material only a few micrometres across.

“This is incredibly valuable work”, says Akselsen. “So now we know how the brittle phase will behave under deformation”, he says. “Studying local strength and ductility properties at this level allows us to develop more accurate models which can be used to predict unwanted incidents”, he explains.

There are many issues that remain unresolved. The researchers are well aware that improvements in quality will be needed when the oil industry starts to produce hydrocarbons north of the Goliat field.