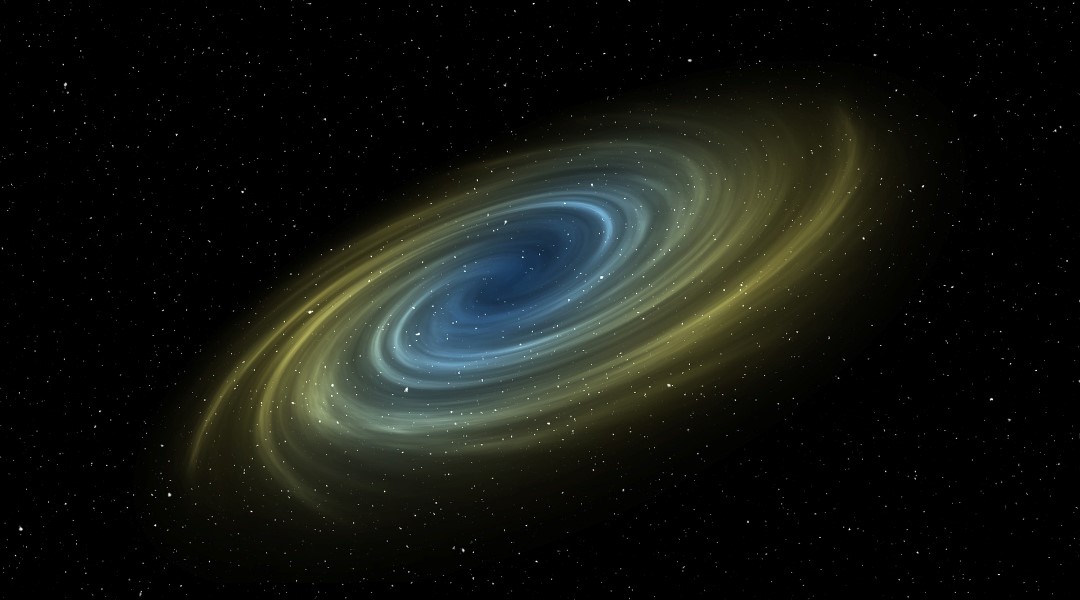 The inexplicably large rotation velocities of stars in galactic outskirts have led physicists to the idea that, in addition to the forms of matter familiar to us, the galaxies must contain a mysterious entity known as dark matter. The contribution of this substance to the gravity field of a typical galaxy can keep rapidly rotating stars in their orbits if dark matter makes up about 85 percent of the matter in the universe.

But is dark matter really necessary to reconcile our theories with astronomical data? A new study published in the Monthly Notices of the Royal Astronomical Society revived the idea that it is not, and that the inconsistency between theory and data can be resolved by changing the laws of gravity.

Scientists have proposed many candidates for the dark matter constituents, but all attempts to observe them in Earth-based experiments have failed so far. These failures have motivated scientists to look for other explanations for the contradiction.

The most promising alternative to the dark matter hypothesis is Modified Newtonian dynamics, or MOND. According to this model, the observed velocities of stars become consistent with our physical theories, if one appropriately modifies the equations of gravitational interaction.

However, this theory ran into major difficulties when astrophysicists discovered galaxies whose stars move at the velocities consistent with the conventional understanding of gravity without the presence of dark matter. In dark matter theory, these observations are explained by some cosmic phenomena which resulted in galaxies losing this substance. MOND, in turn, seems to be inconsistent with these data.

A team of physicists led by Dr. Indranil Banik of the School of Physics and Astronomy at the University of Saint Andrews addressed this problem, and has found a way to resolve the contradiction. These researchers proposed that the star velocities in the problematic galaxies were found incorrectly.

These velocities are measured indirectly — only the velocity component along the line of sight can be deduced from spectroscopic measurements. The perpendicular component is then found from the above component and the apparent ellipticity of the galaxy, which depends on the inclination between the galaxy disc and sky plane: the smaller the inclination, the greater the total velocity.

The scientists assumed that the gravitational interaction is governed by MOND rather than the conventional theory of gravity, and performed a simulation of an evolution of one of the problematic galaxies called AGC 114905, that has been studied thoroughly before.

They found that at a certain stage of development, the galaxy is not round when viewed face-on. Because of this deviation from the round shape, the previous study could have significantly overestimated the inclination. This could mean the galaxy is rotating much faster than thought, removing the tension with MOND.

“Our simulations show that the inclination of AGC 114905 might be significantly less than reported, which would mean the galaxy is actually rotating much faster than people think, in line with MOND expectations,” explained Dr. Banik in an interview.

The researchers think that problems with other galaxies, whose dynamics were considered incompatible with MOND, may have a similar solution. However, this is not the only test that Modified Newtonian dynamics must pass in order to become a full-fledged alternative to the theory of dark matter.

“While MOND works well in the tests conducted so far, the standard approach [to MOND] causes very severe problems on all scales ranging from dwarf galaxies like AGC 114905 all the way up to cosmological scales, as found by many independent teams,” said Pavel Kroupa, Professor at the University of Bonn and Charles University, in an interview.

In contrast to Modified Newtonian dynamics, dark matter theory is not only able to solve the problem of anomalously high star velocities, but also fits well into the model of cosmological evolution of the universe. While this current work represents a valuable piece of support for the MOND theory, more work remains to be done before dark matter can be removed from the textbooks.