Do proteins melt? Or, why protein-based thermoplastics resemble semi-crystalline polymers 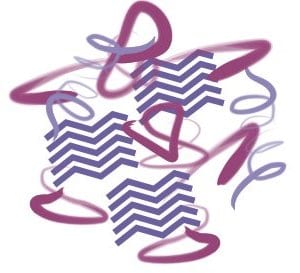 Proteins have a long history of use as polymeric materials, from blood-based woodglue to caseinate buttons. Many of these early examples were thermosetting resins and involved irreversible crosslinking after processing into the desired shape. In recent years attention has shifted to thermoplastic protein-based materials that can be extruded and injection moulded.

J. M. Bier, C. J. R. Verbeek and M. C. Lay (University of Waikato in Hamilton, New Zealand) in their recently published review discuss the similarities or differences between thermal behavior of dry native proteins, proteins in solution and protein-based thermoplastic materials. This is important as successfully shaping useful products by extrusion and injection moulding requires processing above the softening temperature, but also well below the degradation temperature. The structure-property relationship leading to observed properties is also discussed by evaluating expected thermal transitions and their approximate temperature ranges with a focus on proteins relevant to plastic production.

Although denaturation of proteins in solution is referred to as melting by analogy with solids, it is not the same as melting of crystalline regions in synthetic polymers. Denaturation is defined in terms of loss of biological function or long-range molecular order. Localized ordered regions may remain after denaturing, and further aggregation into ordered structures can occur. As well as denaturation, the broadening effect of these structures on the Tg and their actual melting temperatures should be taken into consideration when optimizing thermal processing conditions for protein-based thermoplastics.