Large surface area metallic glass particles were used for rapid dissociation of AZO dye, demonstrating the potential use of these novel materials. 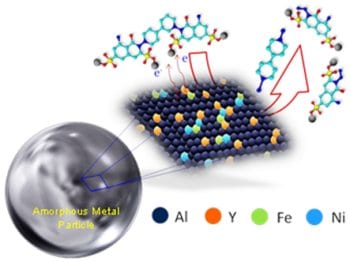 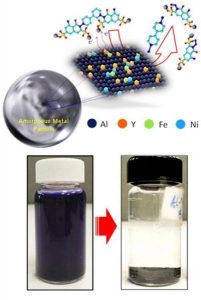 AZO dyes, generated from industrial waste (especially textile industries), create an alarming threat as toxic water pollutants and carcinogens. Recent studies show that AZO dyes decrease the permeability of the blood–brain barrier, which may result in chronic neurological diseases including stroke and neuro-inflammatory disorders. Traditionally, pure transition metals, noble metals (such as platinum and palladium), and carbon-based materials are used to degrade and detoxify different organic water pollutants including AZO dyes. However, high cost and susceptibility to catalyst poisoning limit the application of these traditional materials as water purifier.

In this study by S. Mukherjee et al. from the University of North Texas, large surface area metallic glass particles were used for rapid dissociation of AZO dye, demonstrating the potential use of these novel materials for treating a variety of toxic organic dyes. Aluminum-based metallic glass of composition Al82Y8Ni7Fe3 was found to completely degrade AZO dye at room temperature without any toxic by-products. The dye degradation rate and catalytic activity were characterized by UV-VIS absorption spectroscopy. In addition, by combining different spectroscopy techniques, the dye dissociation mechanism was identified to be a bi-functional surface catalysis process involving the transition metals in the alloy. Charge transfer from simultaneous ionization of the transition metals (iron and nickel) help in dissociating the unsaturated bonds of the AZO dye in an aqueous medium. The amorphous nature of the alloy renders it inert and durable during the reaction, while promoting high surface catalytic activity at the same time. This has the potential of creating a wide range of applications, including high performance catalysis, water purification, and chemical conversion.