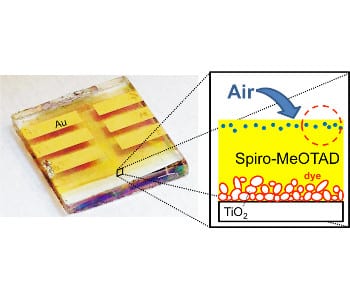 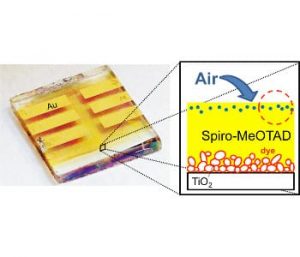 OIST’s Energy Materials and Surface Sciences Unit has made a surprising discovery about the degradation of solar cells that could help pave the way to creating a longer lifetime for these cells. Key factors for creating cost-efficient solar cells to compete with conventional energy sources like fossil fuels include fabrication cost, efficiency and lifetime of the cells. Professor Yabing Qi and members of his unit have investigated the cause of degradation of a high efficiency solar cell. This discovery, published in the Journal of Physical Chemistry Letters, can help move various forms of solar cell technology forward now that researchers know what is causing degradation and shortening the lifespan.

Solid state dye-sensitized solar cells have shown their potential in achieving high efficiency with a low cost of fabrication. Degradation of these cells, which shortens lifespan, is not well understood. To investigate the causes of degradation, Prof. Qi and colleagues focused on a material widely used in these solar cells, which is abbreviated spiro-MeOTAD. This material is used in the upper-most layer of the solar cell and comes into contact with the outside environment. Therefore, it is a likely candidate to be susceptible to degradation from many possible sources including air exposure, continuous light irradiation, elevated temperature and dust.

The most likely source of degradation was thought to be photo-oxidation, which is a chemical process caused by exposure to both air and light. Prof. Qi and colleagues tested whether this process was occurring. Surprisingly, they showed conclusively that there was no detectable photo-oxidation, or chemical degradation, of spiro-MeOTAD even after exposure for a few days. The researchers next looked at other possible degradation mechanisms due to exposure to air alone. Spiro-MeOTAD is an amorphous substance, which is the property that makes it useful in these solar cells. However, this property could also cause a problem in that molecules from the air may easily diffuse, or freely pass into, the spiro-MeOTAD. These air molecules would then become impurities in the solar cells, leading to degradation. After a detailed analysis, the researchers determined this was precisely what was occurring; foreign air molecules were causing degradation of the spiro-MeOTAD layer, resulting in a drop in solar cell efficiency.

The next step is to find a material to encapsulate and protect the spiro-MeOTAD layer from air exposure and prevent diffusion and the subsequent degradation from occurring. Prof. Qi says, “if we can find a method of low cost encapsulation, it is possible, for the first time, to achieve low cost, high efficiency and long lifespans in the same cell.” Since these solar cells are easy and cost-efficient to produce, adding this extra step can provide one more piece of the puzzle for an ideal solar cell.

Prof. Qi added, “this technology is compatible with the coating technology of the flexible transparent electrodes that we are also working on, meaning we can use this research for fabrication of large area, transparent, flexible solar cells.” Prof. Qi and colleagues are moving the world a little closer to using alternative forms of energy. Hopefully one day soon you will see this research come to fruition in cleaner and more efficient forms of energy production.