Researchers from Panasonic Corporation observed an outstanding n-type thermoelectric performance in a low-cost and earth-abundant semiconductor. 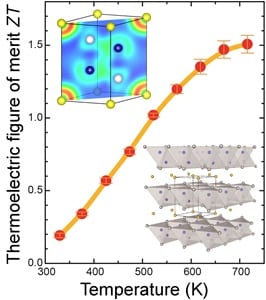 Utilization of renewable energy is a worldwide concern due to increasing demands for reduction of fossil fuel consumption. Thermoelectric energy conversion is a unique renewable energy technology that enables recycling waste heat into electricity as a system consisting of solid-state devices with no moving parts. Improvement of the fuel economy by recovering automotive exhaust heat is only one of the attractive applications of thermoelectric technology. For such an application, we require highly efficient thermoelectric materials with operating temperatures of around 300 °C. However, there has been great barrier for practical application because high performance materials at high temperature are composed of rare and expensive elements, such as Te in PbTe-based thermoelectric materials. Due to these circumstances, the central issue is to discover highly efficient materials which are low-cost and of earth-abundant elements. 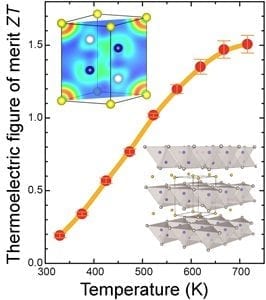 Researchers from Panasonic Corporation observed an outstanding n-type thermoelectric performance (maximum figure of merit ZT ~ 1.5 at 700 K) in low-cost and earth-abundant semiconductor, Mg3(Sb,Bi)2. This high performance material was synthesized by a conventional and facile fabrication process involving mechanical ball milling and sintering. Electronic states simulation played an important role in this discovery. According to density-functional calculation, the conduction band of Mg3Sb2 exhibits ideal features for thermoelectric conversion, that is, multi-valley band structure with low carrier effective mass. The calculation also reveals the isotropic nature of electronic transport that is consistent with the high performance in the fabricated polycrystalline materials.

Electron doping in Mg3Sb2 is another issue that is known among thermoelectric researchers. This carrier doping problem was overcome by their design approach based on defect chemistry. Defect formation energy calculation uncovered that stable Mg vacancies supplying high density holes lead to the persistent p-type character in stoichiometric Mg3Sb2. The researchers also found that these hole carriers could be neutralized by incorporating the excess Mg into compounds. They finally succeeded in synthesizing n-type materials with high thermoelectric performance.

This kind of defect chemistry approach offers wider controlability in materials design, not only in thermolectrics, but also in the other semiconductor technology such as photovoltaic and optoelectronic applications. Moreover, Mg3+dSb2-based thermoelecrtic materials with low-cost, earth-abundant and lightweight elements will bring innovation in the
fuel economy of automobiles.