The first direct observation of the dead-cone effect, which arises during the high energy collisions of strongly interacting particles. 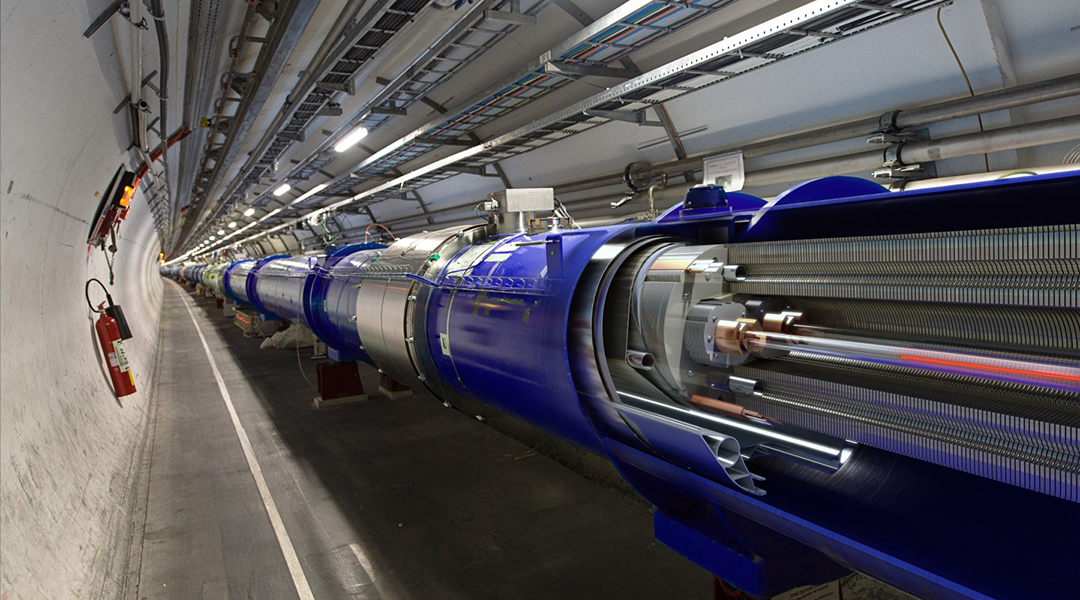 Scientists involved in the ALICE collaboration at the Large Hadron Collider at CERN have reported an experimental observation of the dead-cone effect, which arises during the high energy collisions of strongly interacting particles.

The dead-cone effect is predicted by quantum chromodynamics — the theory of strong interactions — but has never been observed directly. As discussed in a paper published in Nature, the discovery paves the way for a precise measurement of heavy quark masses.

Quarks, which are the building blocks of matter, cannot exist in isolation due to the strong interaction between them mediated by gluons. They are therefore confined within composite particles known as hadrons, which can be made up different defined combinations of the five possible quark species known as quark “flavors”, which have different masses and electric charges.

“Up” and “down” quarks, which make up the most common hadrons — protons and neutrons, which in turn make up atomic nuclei — are just a few times heavier than an electron. The “strange” quark is approximately two orders of magnitude heavier, but compared to its siblings, the “charm” and “beauty” quarks, which are by contrast massive, it is considered light. There also exists a “top” quark, but this particle is so heavy and decays into other particles so quickly that it cannot exist in any bound state, and as a result, it does not belong to any of the hadrons.

When hadrons moving at near-light-speeds in particle accelerators collide, quarks and gluons, collectively called partons, become temporarily liberated. They subsequently emit further partons, each of which in their own turn creates the next batch of such particles. This particle cascade, called a parton shower, culminates in the formation of hadron jets, which are eventually observed by detectors.

Quantum chromodynamics, which describes the strongly interacting particles’ dynamics, predicts that the parton created by a heavy quark is suppressed within a cone around the direction of the quark’s motion and that the angular size of the cone is proportional to the quark mass. The existence of this dead cone should change the angular distribution of the resulting hadronic jets.

This phenomenon has not been directly observed owing to the challenge of reconstructing the cascading quarks and gluons from the experimentally accessible hadrons.

In their study, the physicists analyzed the data collected from experiments done using the Large Hadron Collider, which smashes together proton beams, and using new state-of-the-art techniques were able for the first time to reconstruct the parton shower of a charm quark. To do this, they essentially rolled the reaction back in time, from the detection of the hadron jets to the moment of charm quark creation during the parton shower created by the proton beam collision.

“It has been very challenging to observe the dead cone directly,” said ALICE spokesperson Luciano Musa in an interview. “But by using three years’ worth of data from proton-proton collisions at the LHC and sophisticated data-analysis techniques, we have finally been able to uncover it.”

The size of the dead cone depends on the quark mass, which led the researchers to believe that in future measurements, the techniques they developed could be used for constraining the charm quark mass. Moreover, the same method is suitable for measuring the beauty quark mass, which is known to be even heavier and is expected to have a bigger dead cone.

“Quark masses are fundamental quantities in particle physics, but they cannot be accessed and measured directly in experiments because, with the exception of the top quark, quarks are confined inside composite particles,” explained ALICE physics coordinator Andrea Dainese in an interview. “Our successful technique to directly observe a parton shower’s dead cone may offer a way to measure quark masses.”