Researchers investigating particle suspensions have discovered that different particles make smoother or rougher deposition profiles on the drop edge depending on their shape. 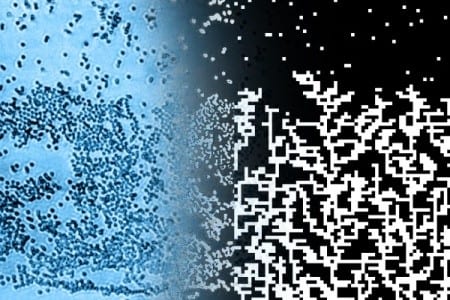 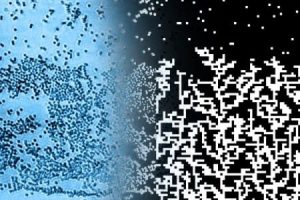 Last year, a team of University of Pennsylvania physicists showed how to undo the “coffee-ring effect,” a commonplace occurrence when drops of liquid with suspended particles dry, leaving a ring-shaped stain at the drop’s edges. Now the team is exploring how those particles stack up as they reach the drop’s edge, and they discovered that different particles make smoother or rougher deposition profiles at the drop edge depending on their shape.

These resultant growth profiles offer tests of deep mathematical ideas about growing interfaces and are potentially relevant for many commercial and industrial coating applications.

The new research was conducted by the members of the original team: professor Arjun Yodh, director of the Laboratory for Research on the Structure of Matter; doctoral candidates Peter Yunker and Matthew Lohr; and postdoctoral fellow Tim Still, all of the Department of Physics and Astronomy in Penn’s School of Arts and Sciences. New to the collaboration were professor D.J. Durian of the Department of Physics and Astronomy and Alexei Borodin, professor of mathematics at the Massachusetts Institute of Technology.

Their study was published in the journal Physical Review Letters.

In the “coffee-ring effect,” drop edges are “pinned” to a surface, meaning that when the liquid evaporates, the drop can’t shrink in circumference and particles are convectively pushed to its edges. The Penn team’s earlier research showed that this phenomenon was highly dependent on particle shape. Spherical particles could flow under or over each other to aggregate on the edges, but ellipsoidal particles formed loosely packed logjams as they interacted with one another on the surface of the drop.

MIT’s Borodin saw the Penn team’s earlier experimental videos online, and they reminded him of analytical and simulation work he and others in the math community had performed on interfacial growth processes. These problems had some similarity to the random-walker problem, a classic example in probability theory that involves tracing the path of an object that randomly picks a direction each time it takes a step. In the present case, however, the random motion involved the shape of a surface: the edge of the drop where new particles are added to the system. Borodin was curious about these growth processes in drying drops, especially whether particle shape had any effect.

“Interfacial growth processes are ubiquitous in nature and industry, ranging from vapor deposition coatings to growing bacterial colonies, but not all growth processes are the same,” Yunker said. “Theorists have identified several qualitatively distinct classes of these processes, but these predictions have proven difficult to test experimentally.”

The two classes of particular interest are “Poisson” and “Kardar-Parisi-Zhang” processes. Poisson processes arise when growth is random in space and time; in the context of an interfacial growth process, the growth of one individual region is independent of neighboring regions. Kardar-Parisi-Zhang, or KPZ, processes are more complicated, arising when growth of an individual region depends on neighboring regions.

A purely mathematical simulation of an interfacial growth process might look like a game of Tetris but with single square blocks. These blocks fall at random into a series of adjacent columns, forming stacks.

In a Poisson process, since individual regions are independent, a tall stack is just as likely to be next to a short stack as another tall stack. Taking the top layers of the stacks as the “surface” of the system, Poisson processes produce a very rough surface, with large changes in surface height from one column to the next.

In contrast, KPZ processes arise when the blocks are “sticky.” When these blocks fall into a column, they don’t always fall all the way to the bottom but can stick to adjacent columns at their highest point. This means that short columns quickly catch up to their tall neighbors, and the resulting growth surfaces are smoother. There will be fewer abrupt changes in height from one column to the next.

“Many theoretical simulations have demonstrated KPZ processes, a fact which might lead one to think this process should be ubiquitous in nature,” Yunker said. “However, few experiments have identified signatures of KPZ processes.”

“The relative paucity of identified KPZ processes in experiments is likely due to two main factors,” Yodh said. “First, a clean experiment is required; the presence of impurities or particle aggregation can destroy signatures of growth processes. Second, a substantial amount of data must be collected to make comparisons to theoretical predictions.

“Thus, experiments must be very precise and must characterize a wide range of size scales from the particle diameter to the growth fronts. Moreover, they must be repeated many times under exactly the same conditions to accumulate statistically meaningful amounts of homogeneous data.”

As in the previous research, the Penn team’s experiment involved drying drops of water with differently shaped plastic particles under a microscope. The team measured the growth fronts of particles at the drying edge, especially their height fluctuations — the edge’s roughness — over time. When using spherical particles, they found their deposition at the edges of the drop exhibited a classic Poisson growth process. As they tried with increasingly elongated particles, however, the deposition pattern changed.

Slightly elliptical particles — spheres stretched by 20 percent — produced the elusive KPZ class of growth. Stretching the spheres further, 250 percent out of round, produced a third growth process known as KPZQ, or Kardar-Parisi-Zhang with Quenched Disorder. It is also called the “colloidal Matthew effect” as the surface’s growth is proportional to the local particle density so that particle-rich regions get richer, while particle poor regions stay poor.

The ability to control surface roughness can be important for industrial and commercial applications, as non-uniformity in films and coatings can lead to structural weakness or poor aesthetics. Surface roughness is controlled passively in the team’s experiments, making this process potentially attractive alternative for more costly or complicated smoothing processes currently in use.

“Experimental successes are highly valued in the math community,” Borodin said. “Not only do they demonstrate real-life applicability of very advanced yet originally purely theoretical research, but they also suggest further directions and even predict yet undiscovered mathematical phenomena.”