In their review published in BioEssays, Sandra Richardson and Geoffrey Faulkner discuss the origins and implications of L1 retrotransposition events during development. 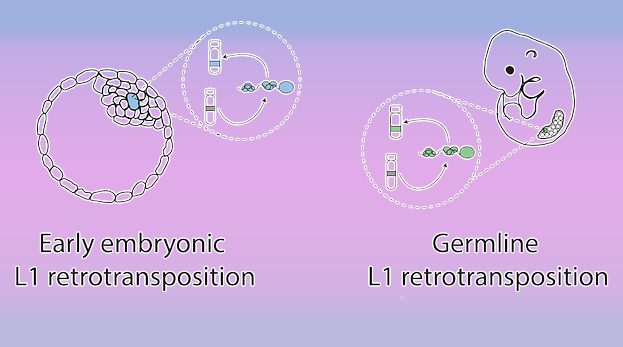 The retrotransposon Long Interspersed Element 1 (LINE-1 or L1) is widely distributed throughout the human and mouse genome where its sequence accounts for 17% and 18% of the genomic DNA, respectively. While most of these copies are not capable of further transposition, about 100 of these L1 elements in humans and about 3,000 in mice retain the ability to mobilize. 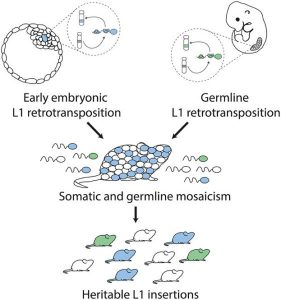 So far, 130 human genetic diseases have been attributed to L1-mediated retrotransposition events. On the other hand, these events provide a continuing supply of genetic diversity. There are estimates that one new L1 insertion arises per 100–200 live births in humans whereas the estimates range from one per 2–3 or–as more recent studies suggest–one per 10 live births in mice.

In their review published in BioEssays, Sandra Richardson and Geoffrey Faulkner take a closer look at the developmental timing of such de novo, heritable endogenous L1 insertions in mice. They first discuss the molecular mechanisms by which L1 retrotransposition occurs and present approaches on how to examine such events in vivo. These approaches include transgenic L1 reporter systems as well as transgenic mouse models and high-throughput sequencing. 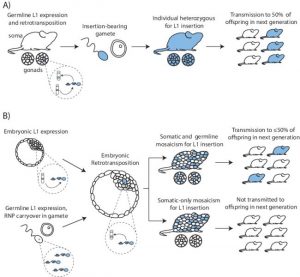 Germline L1 retrotransposition results in an animal heterozygous for the mutation when a gamete harboring the mutation undergoes fertilization. In this case, it is expected that the insertion will be transmitted to about 50% of the offspring (panel A in the figure). Embryonic retrotransposition, on the other hand, leads to a mosaic animal. If the mosaicism affects both the soma and the germline then transmission will occur to up to 50% of the offspring. However, if the mosaicism only occurs in the soma, then this will not be transmitted to the next generation (see panel B in the figure, right).

Finally, the authors also outline some open questions and propose avenues for future research in this field.

Nobel prize in chemistry 2020: Precision genome editing
Study Reveals Hepatitis A Originated in Insects
The paradox of dormancy: Why sleep when you can eat?
Yanglong Hou: A Leader in Multidisciplinary Research