It is my hope that with the collaborative efforts of a unified world, the dark tones of the fossil fuel reliance and heavy pollution will fade to become a distant echo of our past. 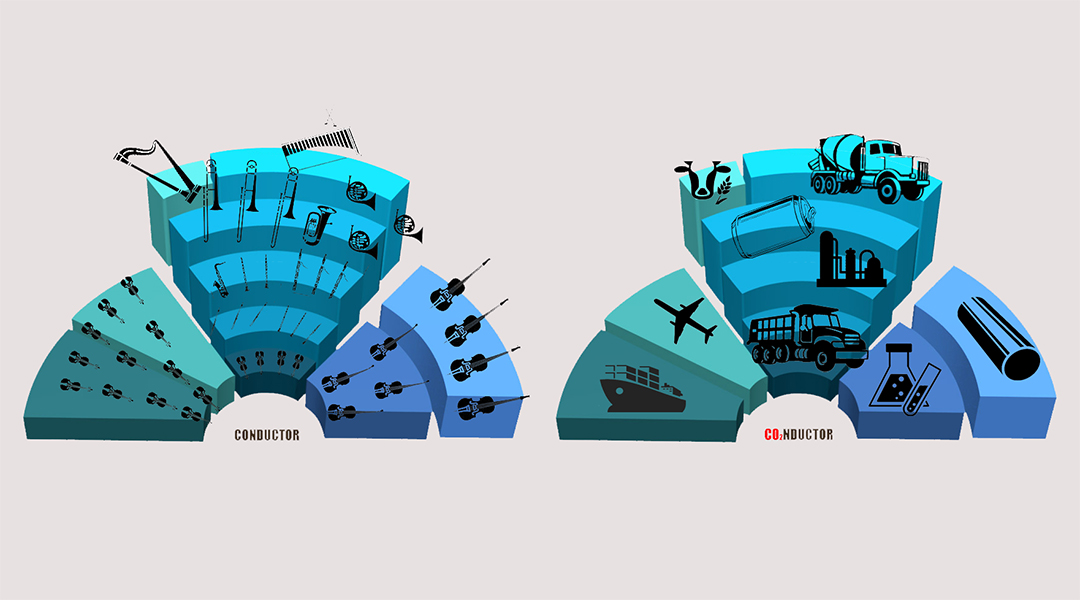 Our history in music, starting from the birth of the industrial revolution, has been heavily accented with the sharp staccato notes of steel on steel. Our industries have driven us to the forefront of the melody, giving humanity the power to shape landscapes with explosive blasts of dynamite and make previously barren deserts sing with the hollow timbre of mono-cultured life; all of these feats guided by the deep, thrumming bass line of the steam-engine and its subsequent iterations. However, these new tones, though marvelous in their novelty, are major contributors to the cacophony that is climate change.

Without immediate action, we may find ourselves deaf to all but the discordant echoes of progress — a sound defined by the beating tempo of acid rain, the crashing swells of tsunamis, and the acrid tones of pollutants.

So how do we prevent this? With the help of a skilled “conductor”, of course. Much like how a conductor brings a section of wayward musicians back into harmony using their knowledge of symphony construction and score layout, an equally skilled leader who is well-versed in all parts of the societal orchestra will be able to bring the ensemble of modern-day industry back into unity.

This is not to discredit the contributions of the individual musicians. Again, similar to an orchestra, it is not the conductor’s fingers that strum the strings or the conductor’s breath which draws sound from the instruments. Without cooperation from individuals, the efforts of even the most skilled conductors armed with the most beautiful scores will be for naught.

An example of such a “skilled conductor” can be found in the orchestrations of the World Economic Forum held in Davos, Switzerland on January 27, 2020. The conductor is Mission Possible, a climate-action partnership composed of more than 400 companies. And its ultimate symphony? To accelerate decarbonization of hard-to-abate industries and heavy emitter transportation over the course of the next decade by masterminding the energy transition from fossil fuels to renewables.

Comparable to how a conductor would balance the different timbres of the band, Mission Possible will have to balance the economic needs of companies and investors while minimizing socioeconomic impacts on communities. Similar to how the conductor keeps scores of musicians in time, Mission Possible will act as the communicator between businesses, communities, institutions, government leaders, and entrepreneurs, with calls to action paralleling the motions for solos and phrases.

Likewise, the Paris Climate Agreement is an earlier, and perhaps better-known, example of a leader in the world orchestra. Ratified by one hundred ninety-six states, it is a series of socioeconomic guidelines designed to minimize global warming and greenhouse-gas emissions.

Though the music produced in its guidance has been revolutionary and much needed in the global symphony, it has not come without its moments of dissonance. Akin to how a player may choose to step away in the middle of a composition, in 2017, the United States of America removed itself from the Paris agreement, resulting in a major loss of economic funding towards the zero-carbon cause. And much like how an orchestra’s missing a player will not measure up to one with all its components, the green-energy effort will not perform as well without the participation of all nations and sectors.

For those of us who have suffered and will suffer the cacophony born of climate change, Mission Possible’s masterpiece and those like it will be a welcome addition to the world progression. However, we must also be sure to take our own initiatives, for no change can be made in apathy. It is my hope that with the guidance of our “skilled conductor” and through the collaborative efforts of a unified world, the dark tones of the fossil fuel reliance and heavy pollution will fade to become a distant echo of our past.

We are the music makers,
And we are the dreamers of dreams,
Wandering by lone sea-breakers,
And sitting by desolate streams;—
World-losers and world-forsakers,
On whom the pale moon gleams:
Yet we are the movers and shakers
Of the world for ever, it seems

Little Dams, Big Problems
A radical view of organelle evolution
Is your work not novel enough?
The cost of chaos: If we can’t control quantity, we’d better control quality