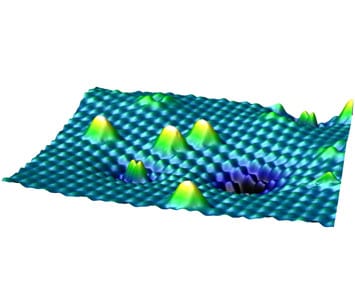 An international team of researchers has confirmed theoretically-predicted interactions between single oxygen molecules and crystalline titanium dioxide. TiO2 is an inexpensive, yet versatile material. It is used as a pigment in wall paint, as a biocompatible coating in medical implants, as a catalyst in the chemical industry and as UV protection in sunscreen.  When applied as a thin coating, it can keep all sorts of surfaces sparkling clean. The use of titanium oxide in the electronics industry is currently being investigated. Fundamental to all these properties could be the atomic properties discovered by the teams of Ulrike Diebold from the Institute of Applied Physics at TU Vienna and Annabella Selloni from the Frick Laboratory at Princeton. 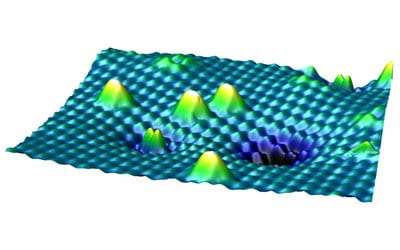 An STM image of the surface of titanium dioxide with different forms of oxygen. The higher, white peaks are oxygen molecules that are sitting on the surface, the smaller double peak in the foreground is an oxygen molecule that is already embedded. Image: M. Setvin et al. / AAAS

The surface of titanium dioxide interacts with oxygen from the air. How this happens at the atomic level has now been shown. Martin Setvin from Diebold’s team took pictures of this surface with a scanning tunneling microscope.  With this method, impressive pictures are produced, in which single atoms can clearly be distinguished.  By applying a high voltage between the tip and the titanium dioxide crystal, the researchers were able to pull vacancies in the atomic structure caused by single oxygen atoms that are missing to the surface and make images of them. Moreover, in a series of images, Diebold’s team was able to show how differently ionised oxygen molecules become embedded in the surface.

With their results, the experimental team in Vienna were able to confirm this atomic dynamic in titanium oxide crystal, which had been previously only been predicted theoretically.  “Our results clearly show how important these oxygen vacancies are for the chemical properties of titanium oxide”, states Diebold.  “We were also able to show that we can alter the charge state of the photocatalytically active oxygen atoms. Perhaps in future it will be possible to produce more active oxygen-rich photocatalysts.  These could be used to convert CO2 into useful hydrocarbons, with the help of the titanium dioxide and light.”