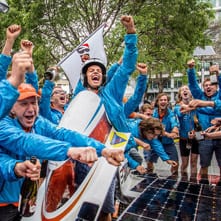 Launched in 1987, the World Solar Challenge is designed to showcase the development of advanced automotive technology and promote alternatives to conventional vehicle engines. Staged between Darwin and Adelaide in Australia, this year the 3,000 km race has been won by the Nuon Solar Team from Delft University of Technology (TU Delft) in The Netherlands in a time of just over 33 hours. Their average speed was 90.71kph.

Key to success was the use of an ultra-light water-based composite pinhole filler and an aerodynamic Sikkens coatings system which reduced wind drag. The triumph comes just weeks after the Dutch VeloX3 recumbent bike – also coated by Sikkens – broke the world record for a human-powered vehicle. 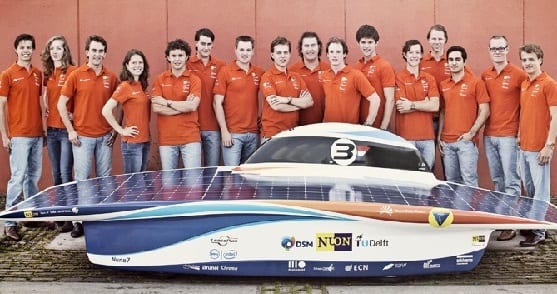 “We’re delighted that our long-standing partnership with the students from Delft has produced another magnificent result and we congratulate the team for this fantastic achievement,” said Klaas Kruithof, Director of Research, Development and Innovation for AkzoNobel’s Performance Coatings activities. “It’s a great example of how we work closely with industrial customers to develop technically advanced coatings that deliver outstanding performance.”

Added John Grevers, AkzoNobel’s Technical Coordinator for Benelux: “The work we have been doing with both the Nuna7 and VeloX3 teams is about more than simply sharing knowledge and expertise. It’s also about recognizing and believing in young talent, driving innovation and taking a fresh look at scientific challenges to find solutions together.”

This year’s race represented the fourth time that Sikkens technicians have worked with the Delft team on the Nuna project. The main addition for 2013 was the new water-based pinhole filler, which was originally developed for use on aircraft. It was combined with an aerodynamically advanced coatings system to give the vehicle the best possible chance of finishing first. Which it duly did, 100km ahead of the team in second.

“AkzoNobel and Sikkens played a vital role in helping us to win the race,” commented Leslie Nooteboom, driver of TU Delft’s Nuon Solar Team. “Each year we have made improvements on weight reduction and aerodynamics which are so important to the competition. The new pinhole filler gave us an even smoother and lighter finish and we have now confirmed its effectiveness by crossing the finish line first.”