Carbon Dioxide to Stay in the Ground

University of Stuttgart partners with Montana State University to conduct research on the long term underground storage of carbon dioxide.

A proposal in the fight against global climate change is to separate CO2 from the waste gases from power plants or factories and to store it deep underground. Natural gas and other gases could also be stored temporarily in the ground in order to buffer fluctuations in the renewable energies. In order for the gases to remain in the ground in the long term, even in the case of unforeseen incidents, sealing technologies, such as biomineralization, are applied as precautionary measures. Scientists at the Chair for Hydromechanics and Modelling of Hydrosystems at the University of Stuttgart want to improve these technologies in a new research project.

In order to implement the internationally agreed climate targets, CO2-separation and storage will probably be indispensable in the near future, in particular for the major producers of greenhouse gas, like for example coal-fired power stations or in cement production.

Gas as an energy source will also probably have to be stored underground for the optimum use of the renewable energies in order to buffer fluctuations when required and when generating renewable energies. Ideal for this are storage reservoirs that are separated from overlying stones or ground water pipes by impermeable top layers. However, CO2 can only be stored from a minimum depth of around 800 meters; in the case of natural gas or synthetic gases shallower depths are sufficient. 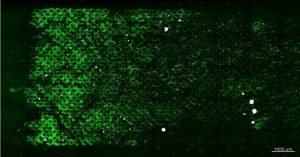 Microscopic image during the biomineralization with the bacteria. The precipitating calcium carbonate is visible as white points. Photo: J. Connolly, Montana State University

In recent years scientists at the Chair for Hydromechanics and Modelling of Hydrosystems at the University of Stuttgart have developed and successfully tested a complex numerical model concept for this biomineralization method. In the framework of the new project called “Enhancement of model concepts for technically controlled calcite precipitation with particular emphasis on several driving processes, the temperature influence and the two-phase flow“ this model is now to be developed further.

In this respect the scientists are looking for ways to be able to apply the already established microbiologically induced calcite precipitation (MICP) method in deeper layers of earth as well. This has not been possible up to now since the soil temperature increases with the depth and the most effective bacteria are only capable of surviving up to a temperature of 45°C.

Partners at Montana State University in Bozeman, USA, are experimenting with alternative processes in which the function of the bacteria is taken over by the enzyme urease or by the soil temperature itself. In order to better understand these methods as well, the effects of high temperatures respectively the enzyme are to be included in the model and simulated. The aim is a numerical biomineralization model that illustrates the various methods of induced calcite precipitation (ICP).