Professor Ozin asks the question; do we want war or peace with CO2? 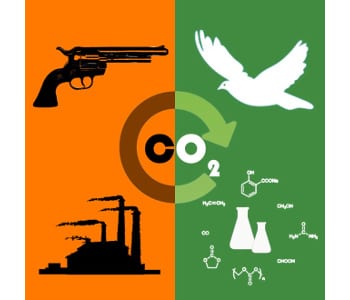 At Peace with CO2

Over its 4.7 billion year history the chemical composition of the Earth’s atmosphere has changed a number of times from its inhospitable chemical origin into the pre-biological era through the microbial era to the biological era that created an atmospheric environment and ecology suitable for sustaining the co-existence of all life forms on earth today.

Figure 1. Every day we influence the dynamic balance between The CO2 War and Peace, by messing with the equilibrium level and steady-state concentration of CO2 and O2 in the atmosphere through the relentless combustion of fossil fuels. If left unchecked and out of balance, this fragile equilibrium – by virtue of photosynthetic bacteria, algae, and plants – can become our nemesis, rather than sustain our genesis and growth. Our well-being and health of collective future now rests on some basic choices and conscious civil actions. Will we choose to flow with Nature, or not, and if not, why not? Choose wisely, and be at peace. Image courtesy Todd Siler, www.artnanoinnovations.com

About 2 billion years ago, oxygen appeared in the earth’s atmosphere for the first time, produced by photosynthetic bacteria that evolved to utilize energy absorbed from ambient sunlight to oxidize water to form molecular oxygen. As a result of this astonishing event, a symbiotic balance and synergy evolved between the O2 required to sustain life and the life needed to sustain O2. In this biological era – and up until recent times – a delicate equilibrium was established that maintained a steady-state concentration of CO2 and O2 in the atmosphere. This equilibrium enabled all life processes to flourish on Earth. Essentially, life was at peace with CO2, and has remained so ever since, Figure 1.

At War with CO2

It started around the period of the industrial revolution (1760-1840) as the concentration of CO2 in the Earth’s atmosphere, which had remained at a stable concentration of around 300 ppm for about 2 billion years, began to be disturbed by the combustion of fossil fuels. At this time coal, oil and natural gas harvested from the earth’s crust was regarded as a miraculous and seemingly infinite supply of stored chemical energy and certainly have proven to be an able provider of power for a growing global population.

This event, which may be referred to as the “Carbon Dioxide Catastrophe”, has caused the concentration of CO2 in the Earth’s atmosphere to gradually increase from its equilibrium level of around 300 ppm to the current level of around 400 ppm. And there is no sign of its abatement in the foreseeable future.

In this context, the IPCC strongly recommended that low carbon sources must be used to generate the majority of the world’s electricity by 2050. They insist on seeing rapid growth of renewables from their current 30% share of the power sector to 80% by 2050. And they believe electricity from fossil fuels – minus carbon capture and storage – should be essentially eliminated by 2100.

Of course, there will always be climate change skeptics who will hawk the heterodox view arguing the massive cost of the transition from fossil fuels to renewable forms of energy and the adverse effects this will have on national and global economies.

Naturally all sorts of economics and ethics related questions will be raised, such as who should pay for climate cleanup and who should welcome climate refugees forced to relocate because of extreme weather conditions: Those countries that have put most of the CO2 into the atmosphere since the industrial revolution or those nations currently emitting the greatest amount of CO2 per capita with willful blindness?

The consensus in the scientific community is crystal clear: If we want to avoid the risk of climate change from a greenhouse gas induced 2-5°C temperature rise our addiction to fossil fuels must be curbed immediately; the pumping of CO2 into the atmosphere must be reduced immediately, and it must be done fast, effectively and efficiently – global emissions must be cut by half in the next fifteen years in the view of the IPCC!

The big challenge for the global community is whether we have the scientific, technological, economic and political means and motivations for commercial implementations to agree upon an approach to accelerate the transition of fossil fuels to renewable forms of energy fast enough to avoid the ramifications of a CO2 calamity?

The big problem in convincing all countries to work together to achieve a rapid decrease in global CO2 emissions, is that the “have and have not” fossil fuel countries have starkly different perspectives on the benefits of curtailing emissions versus the detrimental effects it will have on their economies. In essence, capitalism and the climate are in conflict. It’s self-evident to see that, today, life is at war with CO2, Figure 1.

At Peace Again with CO2

Perhaps the toughest challenge of ameliorating climate change and facilitating a sustainable energy future, in which life is at peace with CO2, is stopping ourselves from treating CO2 as a waste product endangering life on Earth. Instead we need to utilize CO2 as an abundant, non-toxic and low cost feed stock for making fuels and chemicals, enabling life to flourish indefinitely. 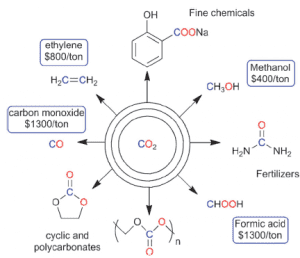 Scheme. CO2 is not a waste product to fear, it is an abundant, non-toxic, low cost C1 chemical feed stock for making fuels and chemicals. Reproduced from Molecular approaches to the electrochemical reduction of carbon dioxide (DOI: 10.1039/C1CC15393E) with permission of The Royal Society of Chemistry.

This is a solvable chemical problem; if the rate of transformation of CO2 to useful molecules and materials can be made to match its rate of production from the combustion of fossil fuels, then our greenhouse gas problem would be resolved and our war with CO2 would be over.

In actualizing this possible reality, CO2 is captured and converted in a carbon neutral cycle to provide fuels and chemicals forever, circumventing the specter of climate change. Essentially the goal is to short circuit the natural carbon cycle, basically doing what nature takes billions of years to do on a much shorter timescale. So now we just use the CO2 we have in a synthetic carbon cycle, not dig up fossil fuels any more.

Sounds too good to be true, hardly, this is not a new problem. Large scale chemical processes have been known for more than a century for making fuels and chemicals using CO2 as the feed stock from direct air capture and fossil fuel burning electricity generating stations, steel, aluminum, cement and bio-ethanol industry sources.

Even though there has been a significant amount of research and development, considerably more effort and money needs to be spent to improve the performance of CO2 conversion to technologically practical rates and efficiencies on an industrial scale and to integrate it into existing chemical and petrochemical industrial processes. Industry road maps show milestones and timelines as to why-how-when-where CO2 conversion fits into their projected carbon fuels and chemicals pipeline.

Some examples of this paradigm are shown above in the Scheme that illustrates industry examples currently being practiced at the Megaton per year production scale for pharmaceuticals (Aspirin), liquid fuels (methanol), hydrogen storage and transportation (formic acid), polymers (ethylene, polycarbonates), fertilizers (urea) and carbon monoxide, which can be used as a feed stock for making myriad fuels and chemicals, such as gasoline, methanol and hydrogen. In principle, these kinds of industrial processes have the capacity to transform CO2 to useful products around the world and could be scaled to produce Gigatons per year, thus making a pretty big dent in the CO2 footprint. 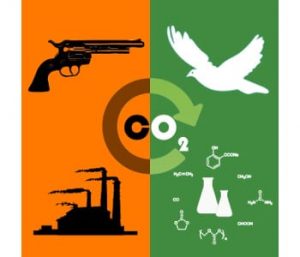 The main contenders under active investigation for CO2 conversion to fuels and chemicals include homogenous and heterogeneous catalysis, biomass, electrochemistry, photoelectrochemistry, solar thermal and photocatalysis. Although there are technical and economic pros and cons for each of these approaches, with continued research and development, there will likely emerge a creative mix of CO2 conversion processes with the overall capacity of utilizing Gigaton amounts of CO2 per annum for making fuels and chemicals. That sure beats storing it in the ground or emitting it into the atmosphere.

A real hurdle that must be overcome for any approach is that it must be cost effective. The cost of the production of fuels and chemicals must be cheaper than existing costs using fossil fuels. If cost effective conversion on an industrial scale can be demonstrated then the people that matter will start taking a real interest. It is noteworthy that CO2 conversion to fuels and chemicals does not seem to be in the conversation at the moment for the IPCC, political leaders or the public.

Can we look forward to this “New CO2 Economy” and a sustainable climate and energy future? With all the new solar fuels science and technology in the pipeline and poised to take off, could this “sleeping giant” emerge more quickly than industry, government, business stakeholders imagine? It seems possible, providing these processes are powered by renewable forms of energy (electricity and sunlight) and not fossil fuels. Any emissions of CO2 into the atmosphere should be strongly regulated by a global CO2 watchdog commission. In this way again, life at peace with CO2, will become an ‘ideal made real’, Figure 2.