Increasing the Supply of Renewable Electricity Creates Potential Energy Storage Applications for Synthetic Fuels Aggressive CO2 reduction targets are stimulating the conversion of fossil-fuel-powered electricity systems into renewable low-carbon systems. This energy transition is enabled by the rapidly increasing deployment and diminishing costs of wind and solar energy. These sources, however, are not obtainable around […] 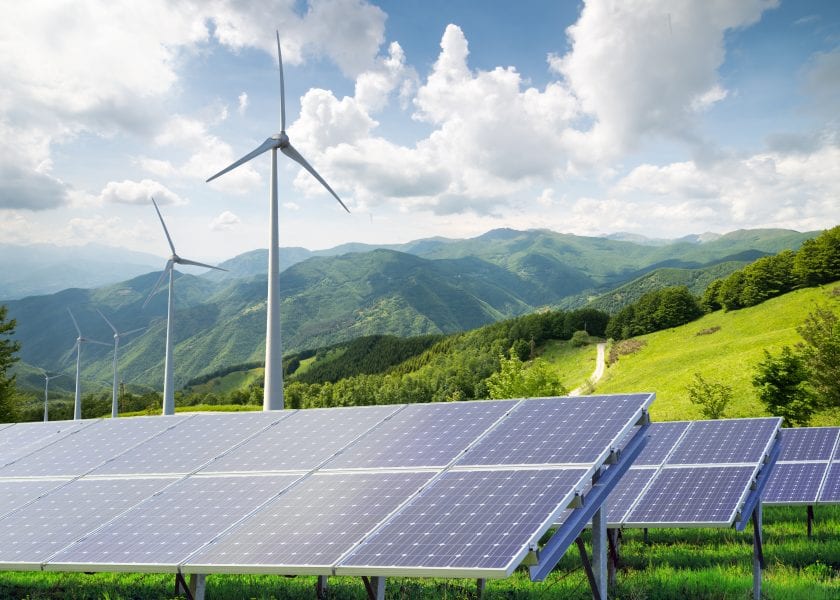 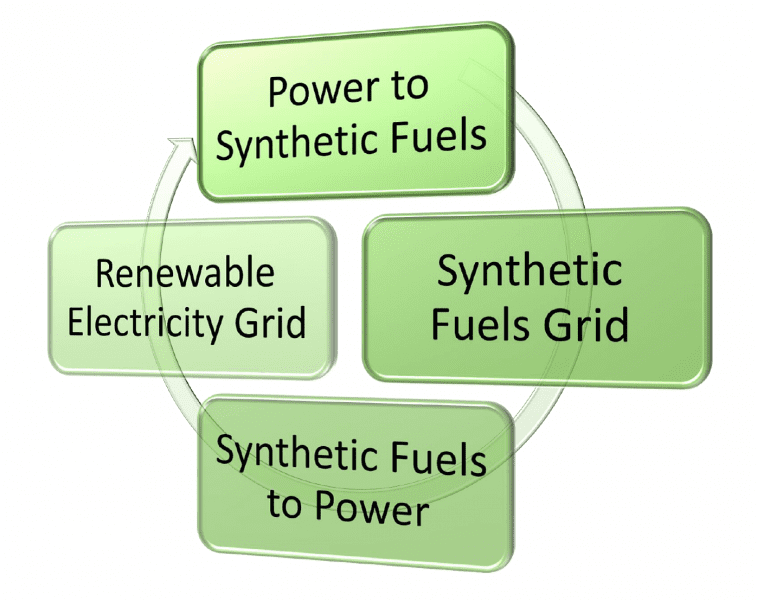 Graphical depiction of the closed-loop processes deemed necessary for balancing the daily and seasonable fluctuations of wind and solar energy that power the renewable electricity grid system by storing the electrical energy as chemical energy in the synthetic fuels grid, sourced from carbon dioxide and water feed stocks.

Aggressive CO2 reduction targets are stimulating the conversion of fossil-fuel-powered electricity systems into renewable low-carbon systems. This energy transition is enabled by the rapidly increasing deployment and diminishing costs of wind and solar energy. These sources, however, are not obtainable around the clock. Solar intermittency occurs daily whereas wind has a longer time intermittency and is less predictable. Furthermore, there is even greater variance over seasons. However, their variability exacerbates the challenge of balancing supply and demand in electricity grids.

Currently, fossil-fuel power plants serve to balance the electricity grid system, which has created a predicament that conflicts with the need for an acutely decarbonized economy by 2050. The future electricity system will ultimately necessitate CO2-free sources of power that have the capacity and flexibility to handle the short-term daily and long-term seasonably variable storage of electrical energy. In addition, the heating/cooling and transport sectors also have a big share of total CO2 emissions and must be put likewise largely on a renewable and CO2-free basis.

Meeting the CO2 reduction targets of 80–95% by 2050 will require more than just increasing the supply of renewable wind and solar energy. It will also need sector coupling; that is, power-to-X, where X stands for heat, synthetic natural gas, fuels, or chemicals. Furthermore, it will need energy efficiency, demand-side management and, in particular, energy storage on a variety of scales and across seasons.

Energy efficiency has held demand for electricity roughly constant in most developed countries for the past decade, despite population and economic growth. Significant new uses, such as electric vehicles and power-to-X will increase electricity demand. Devices such as Alexa and Echo, adopted mainly for their other capabilities, can manage home energy use consistent with fluctuations in supply. Firms are beginning to offer demand management services for large customers like buildings and industries.

Figure 1 further indicates that the options for large-scale storage are limited. Large-scale and transportable stored electrical energy with the desired energy density and capacity for seasonal storage can be achieved using chemical storage. Interest in the use of synthetic natural gas or synthetic fuels for storing renewable electricity stems from comparison of their chemical energy storage capacity with other technology solutions. Moreover, a huge infrastructure for storing hundreds of TWh of natural gas and liquid hydrocarbons already exists and could be used right away. 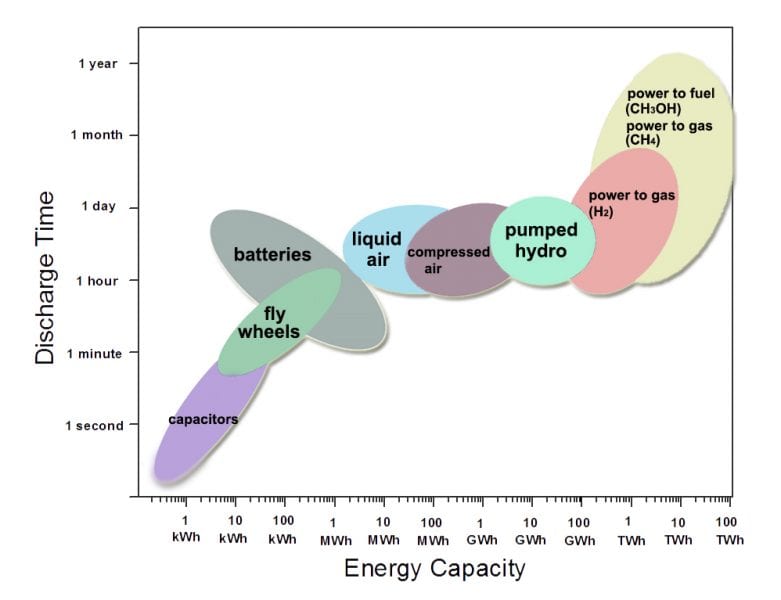 Figure 1. Comparison of electricity storage technologies showing the relationship between energy capacity and time for discharge at a rated power, from which one concludes that large-scale and transportable stored energy requires power-to-gas (methane) or power-to-fuel (methanol). Graphic courtesy of Chenxi Qian.

Synthetic hydrocarbons made from CO2 can provide large-scale, carbon-neutral electricity storage, transportation, and generation. Synthetic fuels can be made from H2 obtained by electrolysis of water, which together with CO2 sourced from industrial emitters or thin air can be converted by heterogeneous catalysis to high volumetric energy density synthetic fuels, such as methane and other hydrocarbons, as well as clean-burning oxygenates. Low-temperature alkaline and polymer electrolyte membrane (PEM) electrolysis are commercial at the MW scale. By parallelization or many decentralized units, GW installations are possible. High-temperature steam electrolysis using ceramic technology has not yet reached this level. Co-electrolysis of water and CO2 is also possible and directly delivers synthesis gas for further conversion into the same molecules. However, it too is not commercially available yet on a larger scale.

Such gaseous and liquid fuels, generated from CO2 and H2O feed stocks, can be produced on a grand scale. They can be stored for days, weeks or even months without losing energy, before being transported and subsequently used to fuel industrial processes and electricity generating units, rendering them ideal for balancing the variability imposed by renewable electricity sources on the grid.

It is worth mentioning that the ease of transportation and potential for long-term storage of liquid hydrocarbons also make a chemical-fuel-based energy storage infrastructure highly beneficial to isolated communities. These communities would be unlikely to benefit from stabilization of the central electricity grid alone.

The round-trip efficiency of the entire circular process of electricity recovered from storage as synthetic hydrocarbons versus the electricity input is currently around 30–50%, with a volumetric energy capacity that enables GWh to TWh storage. Presumably, the best-case scenarios for optimization of these round-trip efficiencies ensure that waste heat, produced during fuel synthesis, and fuel combustion, is fully recovered, and losses during transport or storage are negligible. Added advantages of this approach include convenient transportability, and health, safety, and environmental protection superior or comparable to currently used fossil fuels. In addition, the abundance, non-toxicity, and low cost of raw materials, mainly CO2 and H2O, favor the choice of synthetic fuel storage media. Life cycle and techno-economic analysis will likely improve as the round-trip efficiency and adoption of the technology increases. An often used counter argument is that CO2-derived fuels cannot reduce CO2 emissions as ultimately they re-emit the gas. However, this argument fails to appreciate the fact that this approach avoids new fossil carbon entering the supply chain. Furthermore, the synthetic fuels can be produced in high purity, thus avoiding the additional environmental emissions burden of fossil fuels.

Of course, the well-practiced pumping of water to dams for storing large-scale electrical energy has a higher round-trip efficiency, and is presently the most economically feasible option, but is limited to suitable locations such as mountains. In addition, the concept of advanced adiabatic compressed air energy storage offers round-trip efficiency exceeding 70% and promises to reach competitive costs provided there is access to tunnels or geological sites to store large volumes of compressed air. 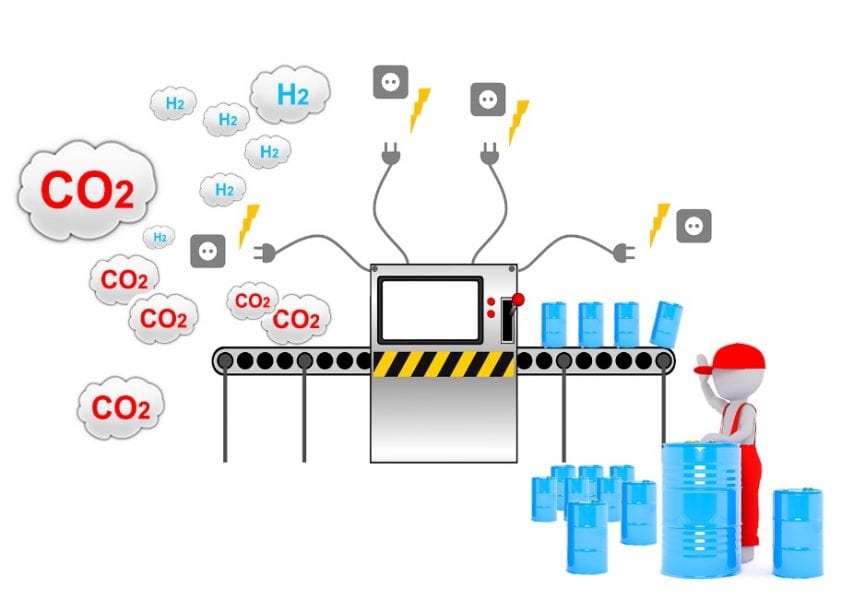 What do we do in a future with surpluses of renewable electricity and hydrogen, but which is still short of fuel? Graphic illustration courtesy of Chenxi Qian.

While the round-trip efficiency of “making–storing–using” renewable electricity by any one of the aforementioned methods will contribute to its cost, other factors, such as geographical location, geological assets and transportation logistics, have to be included in the life-cycle analysis to establish the overall techno-economics of the process, and hence acceptance of the best practice for each situation under consideration.

At the time of submission of this article, a potentially game-changing battery technology described by MIT researchers might become a competitor for large-scale, long-term energy storage. In brief, it is an “air-breathing” redox flow battery based on an aqueous sulfur–sodium–air system. The cost of chemicals for the battery amounts to only US$1 kWh–1, which is about 30× cheaper than competing lithium-ion batteries. A techno-economic analysis showed that the cost of installation would be comparable to pumped hydroelectric storage but without suffering its geographical and environmental limitations. A large-scale system could store electricity for days to seasons, for about $20 to $30 kWh–1. It is worth mentioning that long-term storage across seasons could prove a problem due to leakage. While battery technology may prove beneficial over a 24-hour charge–discharge cycle, it will not be appropriate over seasonal storage cycles.

In practice, if a large-scale, redox flow battery system of this type proves to be cheaper, equally reliable, and has a higher roundtrip efficiency than the aforementioned competing grid-scale electricity storage approaches then these are very important arguments from the perspective of the electricity subsystem. There remains, however, the need to also get rid of CO2 emissions in heating/cooling and transport.

The race is heating up in the quest to find a flexible, scalable, energy efficient and low-cost solution to the challenge of balancing supply and demand on the renewable electricity grid.