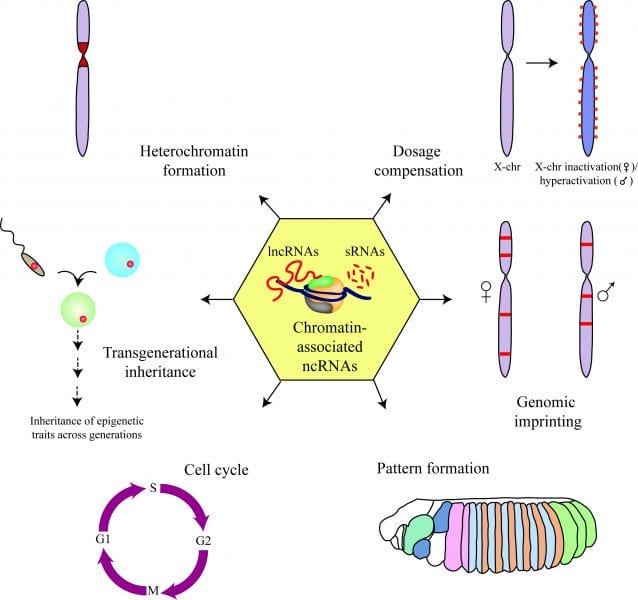 The discovery of noncoding RNAs (ncRNAs) and their involvement in a wide variety of regulatory processes rendered the term ‘junk DNA’ obsolete. With more sophisticated tools available, ncRNAs were shown to be associated with chromatin, where they play critical roles in chromatin regulation. Therefore, the traditional concept of functional chromatin being composed of DNA and proteins has been modified to include ncRNAs as an integral part of chromatin. An RNA molecule is suitable to carry out regulatory functions at the chromatin since it can directly bind to DNA in a sequence-specific manner as well as indirectly via DNA-binding proteins. In addition, its ability to form secondary structures makes it capable of recruiting modifiers to chromatin. The suitability of RNA as a chromatin regulator is demonstrated by the large number of essential processes that involve RNAs.

In a recent WIREs RNA review, Acharya et al. provide a summary of the roles of different ncRNAs in establishing and maintaining epigenetic patterns during development and inheritance. ncRNAs are involved in transient as well as heritable chromatin modifications during development and cell cycle. Depending on the process involved, different families of ncRNAs employ different mechanisms to achieve chromatin regulation, which has been discussed in the review with specific examples from the major types of ncRNAs.

The recent findings on the role of ncRNAs in the inheritance of acquired epigenetic traits across generations has opened up an exciting field of transgenerational inheritance. The review briefly summarizes findings on the function of ncRNAs in the transmission of epigenetic memory across successive generations of offspring. Additionally, the authors briefly discuss the importance of the emerging roles of RNA modifications, which can alter certain properties of an RNA molecule such as length, conformation and stability. In sum, the review provides an overview of different chromatin-associated roles of ncRNAs in the establishment and maintenance of heritable epigenetic fates.