Chimeric RNAs can be generated by not only chromosomal rearrangements at the DNA level, but also intergenic splicing at the RNA level. Chimeric RNAs are demonstrated to be not the elusive features of cancer cells, but also present in normal physiology and with diverse functions. 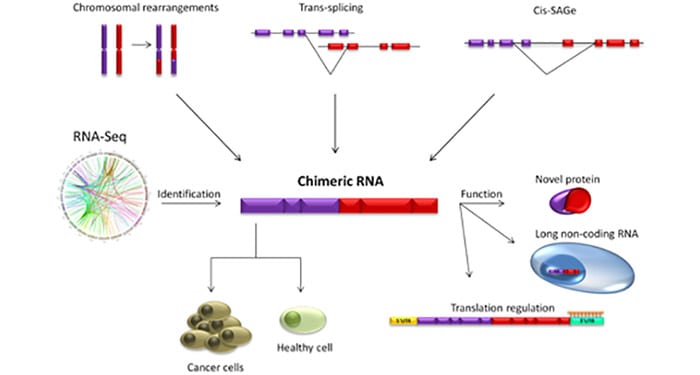 Genomic technology is advancing rapidly; whole genome and transcriptome sequencing are becoming routinely used laboratory techniques. With these advancements in sequencing technology, in conjunction with bioinformatics techniques, the secrets of the human genome and transcriptome are being revealed, including the concept of “chimeric RNA”. The use of this term usually opens a floodgate of thoughts, centered around one terrifying term – “cancer”.

While it is true that some gene fusions and their chimeric RNA products are known to be associated with certain forms of cancer, recent studies indicate that their concept may simply be misunderstood. Not only have a multitude of new chimeras been identified in non-cancer tissues and cells, but it has also been determined that they likely hold biological significance. Perhaps, chimeric RNAs are ways to expand our functional genome, another component of basic biology. The way in which chimeric RNAs have been traditionally regarded, down to the very core of their concept, is shifting.

How these chimeras are formed, as well as their role in human biology, were thought to be well characterized; however, it is now known that they form via a number of different mechanisms, and that they are more common than previously believed. In a recent review article in WIREs RNA, Chwalenia et al. summarized the generating mechanisms of chimeric RNAs, discussed different models, described approaches to identify chimeric RNAs, highlighted their relevance in cancer and normal cells, and offered their insights on the topic and directions for the future research. Chimeric RNAs will continue to challenge basic biological concepts, as well as mold the future of cancer diagnostics and treatment.

Bridges, wires, and a chameleon: Crossing the membrane’s fortifications
Deciphering Ribosomes' Actions in Living Cells
RNA-RNA interfaces as a possible antibiotic target
ROS and the Making of the Modern Cell