The PEtOx-b-LPEI copolymer could have important applications in gene delivery and gene silencing as a polymeric vector. 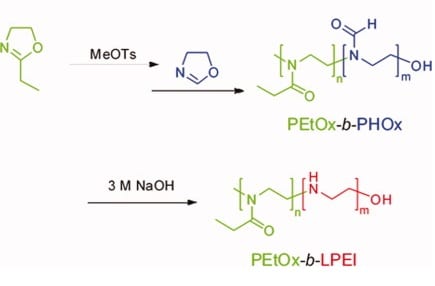 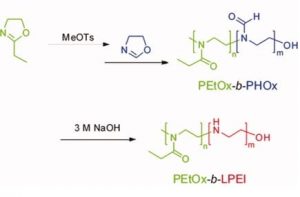 Linear poly(ethylenimine) (LPEI) is of high interest in pharmaceutical research but is limited due to cytotoxic effects. Writing in the Journal of Polymer Science: Polymer Chemistry, Ulrich Schubert and colleagues prepare a combination of LPEI and poly(2-ethyl-2-oxazoline) (PEtOx) to create a more efficient material.

LPEI is widely used in pharmaceutical research, since it can interact with DNA, RNA, and siRNA, and shows high transfection efficiency. However, LPEI is cytotoxic and has a low hemocompatibility and poor water solubility. Chemical modifications with biocompatible compounds have been performed to overcome these drawbacks. In literature, a large number of PEG-LPEI copolymers are described, but poly(2-oxazoline)s (POx), particularly poly(2-ethyl-2-oxazoline) (PEtOx), has shown similar features to PEG but has advantages such as low viscosity and high stability.

“PEtOx reduces the nonspecific interactions with the body and blood components, increasing the blood circulation time, and lowering the cytotoxicity, and has good water solubility. Hence, we intended to combine the beneficial properties of both, LPEI and PEtOx, and create a material that will have a “stealth effect” as well as sufficient transfection efficiency, and good water solubility,” says Schubert.

The researchers have “developed a very simple method to synthesize 2-H‑2-oxazoline (HOx) using only cheap and non-toxic compounds and synthesized the new and potentially highly interesting copolymer PEtOx-b-LPEI. To this end, the starting material PEtOx-b-PHOx was prepared by a simple sequential monomer addition approach, and subsequently hydrolyzed under basic conditions.”

Furthermore, the researchers believe that if the PEtOx-LPEI copolymer shows the desired properties, it could have important applications in gene delivery and gene silencing as polymeric vectors. “However, even though PEtOx-b-LPEI could be synthesized, there still remain some challenges,” explains Schubert. “Due to solubility problems, the preparation of the starting material PEtOx-b-PHOx is limited to a certain EtOx/HOx ratio, meaning long PEtOx blocks and short PHOx blocks, and therefore short LPEI blocks.”

Further research will focus on the identification of suitable solvents, which do not limit the block ratios of PEtOx-b-PHOx as well as other methods for the synthesis of well-defined PEtOx-b-LPEI. In addition, the transfection efficiency and cytotoxicity of PEtOx-b-LPEI will be investigated.

Pharmacist-Led Interventions May Help Prevent Cardiovascular Disease
The first reported case of COVID-19 community transmission in the U.S: A case study
A wound dressing that kills bacteria
Regenerating nerves with an mRNA therapy