Charge of the Sunlight Brigade 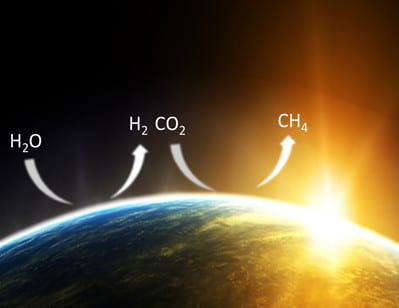 Figure 1 Concept of a sustainable solar fuels earth founded upon the light-assisted photo-conversion of CO2 and H2O to solar fuels such as CH4.

Alfred, Lord Tennyson’s narrative poem, “Charge of the Light Brigade”, reminded me how humankind is now faced with a conflict between climate and capitalism and governments, business and society have to make the difficult choice between the nobleness and societal responsibility of transitioning to sustainable forms of energy versus the greed and communal irresponsibility of promulgating an unsustainable fossil fuel economy and its inconvenient consequences.

In this context, the “Sunlight” Brigade in the title of this article makes me think about a global army of heroic materials scientists and engineers who have dedicated their careers to help save humankind from the deleterious effects of fossil fuel induced climate change. Their “Charge” into the climate change battle is motivated by the quest for solar powered technological solutions to the greenhouse gas problem through advanced materials energy research that can use carbon dioxide as a plentiful feed stock for making fuels and chemicals and thereby reduce its concentration in the earth’s atmosphere to pre-industrial levels.

Two promising approaches that offer the potential to ameliorate the adverse effects of anthropogenic carbon dioxide emissions on our climate are founded upon the use of sunlight to generate and manipulate charge in semiconductor materials. These are based upon: (i) the separation of electrons and holes to make solar electricity, and (ii) the reaction of electrons and holes with chemical compounds to make solar fuels. This two-pronged “Charge” of the “Sunlight” Brigade to generate solar electricity and solar fuels has the potential to greatly reduce the global energy demand currently supplied by non-renewable fossil fuels.

To amplify, molecule and materials chemistry has a pivotal role to play in the development of new and improved catalysts for the production of solar fuels from water, carbon dioxide and sunlight in order to meet the efficiency and scalability demands necessary to significantly impact the amount of carbon dioxide in the earth’s atmosphere. For example, in the ideal solar powered regenerative energy system, using a tandem photo-reactor, water will be split by sunlight using an appropriately designed photo-catalyst and the hydrogen so produced will reduce carbon dioxide using sunlight and a second photo-catalyst, to produce a solar generated fuel such as carbon monoxide, methane, methanol, formic acid and dimethylether.

While these photo-chemical transformations are well known, photo-catalysts have not yet been discovered with the efficiency and stability required to deliver globally relevant quantities of molecular energy carriers that can meaningfully impact the levels of carbon dioxide greenhouse gas emitted into the earth’s atmosphere.

Based upon exciting materials chemistry developments recently being reported for light-assisted, gas-phase photochemical conversion of carbon dioxide to fuels and chemicals, it seems like it is only a matter of time before globally significant efficiencies will be achieved, and the vision of the solar refinery of the future could be reduced to practice, Energy and Environmental Science, 2014, DOI: 10.1039/c4ee01958j.

In the context of the solar refinery, it is worth recalling a roughly one hundred year old quotation from a paper in Science by Giacomo Luigi Ciamician, considered by many to have pioneered the field of photochemistry, where he predicts that humans will one day master the ability to mimic photosynthesis (Ciamician, G. The Photochemistry of the Future, Science, 1912, 36, 385-394):

“On the arid lands there will spring up industrial colonies without smoke and without smokestacks; forests of glass tubes will extend over the plains and glass buildings will rise everywhere; inside of these will take place the photochemical processes that hitherto have been the guarded secret of the plants, but that will have been mastered by human industry which will know how to make them bear even more abundant fruit than nature, for nature is not in a hurry and mankind is. And if in a distant future the supply of coal becomes completely exhausted, civilization will not be checked by that, for life and civilization will continue as long as the sun shines!”

In his Science paper Giacomo Luigi Ciamician predicted that the photochemistry of the future should not be postponed to distant times and that industry would benefit by using all the energies nature puts at its disposal. He saw that human civilization was exploiting mainly legacy fossil solar energy and thought it would be much better to make use of radiant energy from the sun.

“I’d put my money on the sun and solar energy. What a source of power! I hope we don’t have to wait until oil and coal run out before we tackle that. I wish I had more years left.”

“It is time to build an actual artificial photosynthetic system, to learn what works and what doesn’t work, and thereby set the stage for making it work better”.

In view of the impending climate change and energy security challenges confronting the human race, the prescience of Giacomo Luigi Ciamician, Thomas Edison and Melvin Clavin is extraordinarily close to actuality today and the “Sunlight” Brigade is “Charged” with their mission to make the Utopian vision of a sustainable solar fuels earth, founded upon the light-assisted photo-conversion of CO2 and H2O to solar fuels such as CH4, a reality (Figure 1).