A multi-channel organic electronic ion pump for the creation of Aβ plaques is developed. 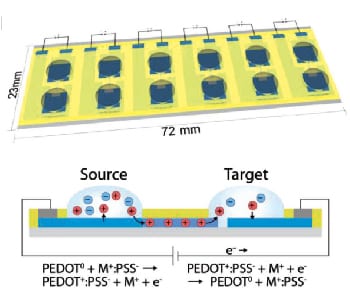 Alzheimer’s disease (AD) is responsible for over half of the cases of dementia today. The age-related disease is poorly understood and case numbers are projected to quadruple by 2050. What is known, is that AD is linked to the formation of so-called amyloid-beta (Aβ) plaques, protein aggregates that can damage neurons in the brain. Therefore, there is significant interest in research on Aβ for detecting and hopefully curing Alzheimer’s disease.

A group of scientists from Linköping University has now developed a multi-channel organic electronic ion pump (OEIP), that allows the creation of Aβ plaques in vitro, with high spaciotempora resolution. The OEIP is a drug delivery device for controlled non-convection delivery of small ions or charged biomolecules to target solutions. In this case the OEIP was used to deliver protons through a microscopic channel into a solution of Aβ protein, thereby facilitating the aggregation process.

The authors predict that the OEIP methodology can be implemented in multi-array systems that can be used in the study of protein aggregation in confined spaces or together with cultured cells. The methodology could further be useful for the development of screening platforms assessing the influence of different molecules on the Aβ-aggregation process.