Could Some Cases of Autism be Prevented by Nutritional Intervention?

In a Hypothesis article published in BioEssays, Arthur Beaudet speculates that brain carnitine deficiency might be the cause for about 10-20% of autism cases. 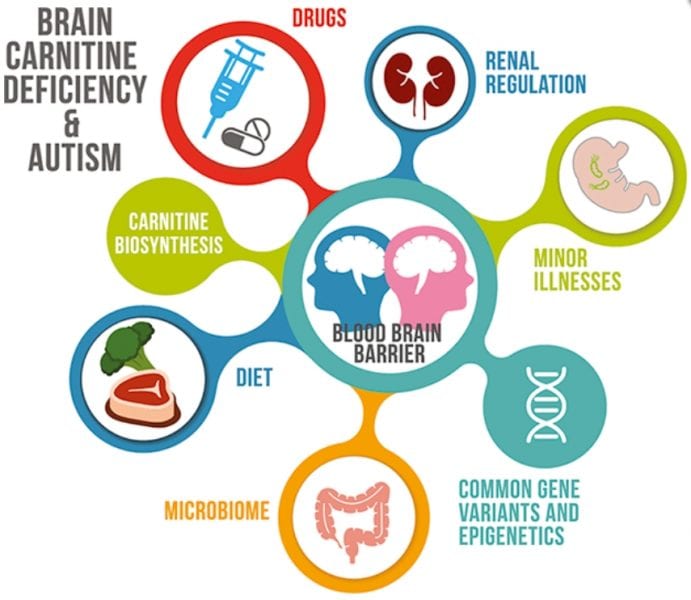 Autism describes a very heterogenous set of symptoms ranging from severe phenotypes showing congenital malformations, abnormal brain structure and intellectual disabilities, to children who appear normal but are socially impaired. This latter, milder form of autism is characterized by an extreme male bias. In a Hypothesis article published in BioEssays Arthur Beaudet speculates that this “essential” or non-Mendelian, non-dysmorphic autism might be caused by brain carnitine deficiency.

Carnitine is mainly found in red meat but also in other animal foods such as fish, eggs and milk. In addition to dietary intake, carnitine can also be synthesized in the human body. Its main role is to enable the transfer of fatty acids into mitochondria. Beaudet hypothesizes that a lack of carnitine in the brain may disturb neurodevelopment, perhaps also neurogenesis, and synaptic development.

Support for this hypothesis comes from the discovery that loss of function of the TMLHE gene is a risk factor for autism. TMLHE is located on the X-chromosome, and its protein converts trimethyllysine (TML) – that is derived from protein degradation – to hydroxyl-TML representing the first step in the carnitine biosysnthesis pathway. It should be noted here, however, that only about 3 percent of males with a deficiency in TMLHE develop autism. In addition to TMLHE, Beaudet and colleagues have identified another X-linked gene, SLC6A14, with a connection to carnitine: its protein is involved in carnitine transport across the blood-brain barrier.

In his article, Arthur Beaudet also briefly discusses deficiencies of other micronutrients as well as the contribution of low levels of polyunsaturated fatty acids (PUFAs).  Furthermore, he makes suggestions on how this brain carnitine deficiency hypothesis could be tested.

That “junk” DNA … is full of information!
Viking identity was not limited to people with Scandinavian ancestry
A “time-accelerated computational microscope” provides biologists with powerful insights
Protein Biohybrids as a Toolkit for New Materials