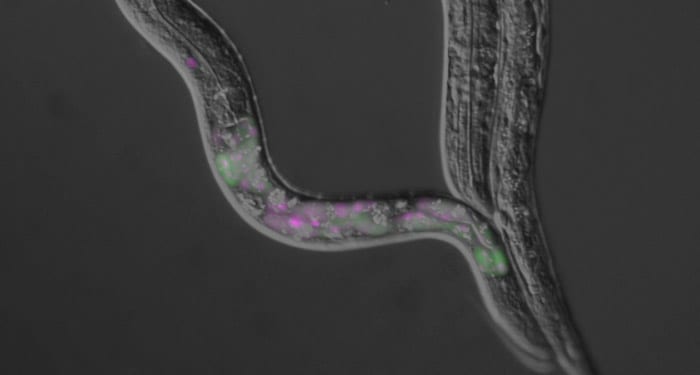 Humans have 20,000-25,000 protein-coding genes, just four times as many as monocellular organisms such as baker’s yeast. However, humans make many more kinds of proteins than monocellular organisms thanks to a mechanism termed alternative processing of precursor messenger RNAs (pre-mRNAs) during the course of gene expression. It is now known that more than 90% of protein-coding genes undergo alternative pre-mRNA processing and many of them are regulated in a tissue- or cell-type-specific manner. Deregulation of pre-mRNA processing may cause diseases, but studies of the underlying mechanisms have been limited.

A review article in WIREs RNA by Wani and Kuroyanagi from Tokyo Medical and Dental University summarizes advantages of the model organism Caenorhabditis elegans in elucidating principles of alternative pre-mRNA processing regulation in multicellular organisms. The tiny nematode worm C. elegans has just 1,000 cells, yet is comprised of multiple tissues such as the nervous system, muscles, digestive tract, and hypodermis. Despite its small number of cells, C. elegans has about 20,000 protein-coding genes, up to 25% of which undergo alternative pre-mRNA processing. What makes C. elegans ideal for studying mRNA processing among model organisms is that it is transparent. Use of multiple fluorescent proteins as a readout of cell-type-specific pre-mRNA processing enables searching for factors and genomic sequences necessary for the regulation in living worms.

The regulation factors and sequences discovered thus far in C. elegans turned out to be highly similar to those in mammals. Future studies with this animal will provide further insights into the regulation and evolution of critical alternative pre-mRNA processing events.

How known drugs could be applied to the current coronavirus outbreak
Viking identity was not limited to people with Scandinavian ancestry
Understanding consciousness: researchers identify key neural structures
Understanding language evolution: Beyond Pan-centrism