Business as usual … on the edge: Neuronal outgrowths do their own maintenance 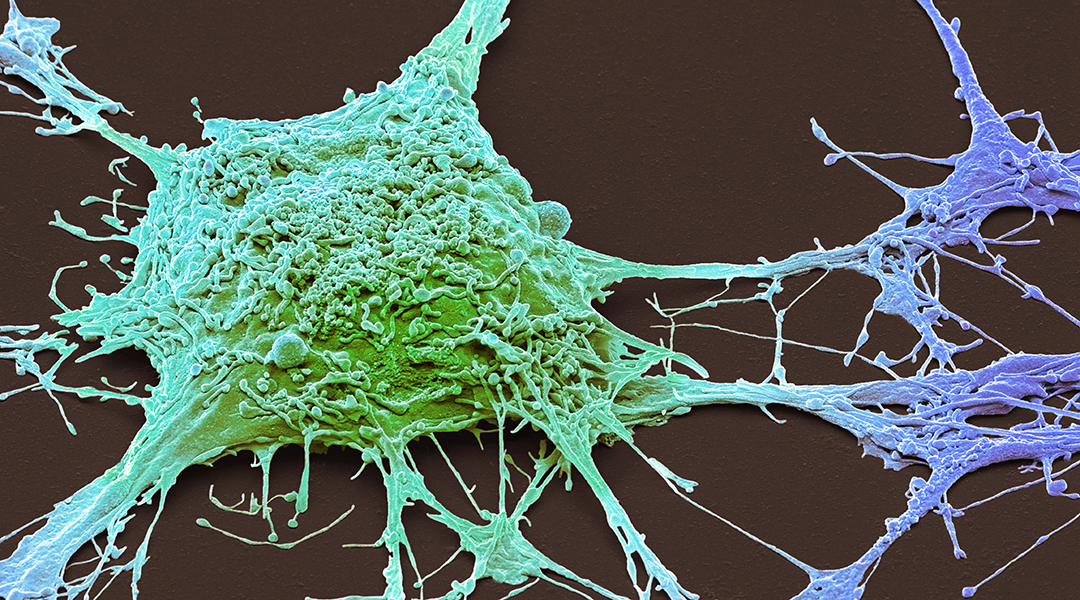 Of all types of cells, neurons probably have the most complex forms and functions. They often stretch over long distances, extending their reach through axons and dendrites far away from the main cell body. Normally cellular responses over such distances would take a very long time, but neurons can react rapidly to signals that arrive at their outgrowths. This is crucial for the growth of neurons and the remodeling of synapses, which is an essential process for memory formation and learning. To achieve such fast responses, the neurons draw on local pools of messenger RNA (mRNA) that contain copies of the genetic code with the instructions to make new proteins that are immediately available on site.

Scientists have been studying such localized mRNAs in the growth cones of axons for years, as well as the contents of dendrites. But only recently have advances in applying next generation sequencing techniques to neurons permitted us to determine the full extent of these pools.

In recent years, multiple studies have been conducted on different subtypes of neurons from multiple species. So far, however, a comprehensive comparison of these results has been lacking. This is a problem because disruptions of mRNA localization are thought to play a role in neurodegenerative disorders such as spinal muscular atrophy (SMA) and amyotrophic lateral sclerosis (ALS). Without an established baseline, the importance of these effects is hard to assess.

“The molecular differences in localization between neuronal subtypes and species are so far not well understood, which is why we compared the available datasets,” said von Kügelgen, first author on the study. “Individual studies usually focus on one neuronal subtype, either because it is associated with a certain disease or because they have the expertise with that particular celltype.”

This comparison revealed a common set of molecules that largely includes components of the mRNA translation machinery, cellular cytoskeleton, and transcripts associated with mitochondria and the formation of the outgrowths — almost all of which have to do with cell maintenance and general housekeeping rather than direct roles in neuronal signaling. While mRNAs of these types have been observed in outgrowths for some time, the striking consistency of the team’s findings suggests that maintaining basic cellular functions remains important throughout the lifespan of the neurons.

“We were surprised to find some of these specific mRNAs to be so consistently localized,” said von Kügelgen. “The protein products they encode are generally assumed to be localized to cell bodies or even the nucleus.” Such unexpectedly localized molecules include transcription factors, which are known for their roles in controlling gene expression by interacting with the nuclear genome. However, the production of these proteins in neuronal outgrowths may have a long-range signaling function when they are transported back to the nucleus.

Also unexpected was the strong presence of mRNAs coding for proteins of the ribosome in neuronal outgrowths — this vast molecular machine, which translates messenger RNAs into new protein, is usually assembled from multiple parts in the nucleus. This finding support recent data suggesting that ribosomes can directly replace old parts for newly made ones; most likely to keep them functioning.

In another step, the authors performed an analysis to group different datasets by their similarity, which confirmed the consistency of the set of localized mRNAs. Interestingly, this analysis could not distinguish between different subtypes of neurons — the mRNAs in their outgrowths looked quite similar. This is probably a methodological issue, arising from the fact that the datasets were based on different approaches and methods. Even so, different subtypes of neurons appear to consistently establish similar pools of localized mRNA whose functions involve basic cellular maintenance.

“These data will be important for future studies in neurobiology and understanding how mRNA localization changes during healthy brain functions and pathological conditions,” says Marina Chekulaeva, the study’s lead scientist. “It can serve as a great resource to select appropriate model systems and genes for studying mRNA localization.”