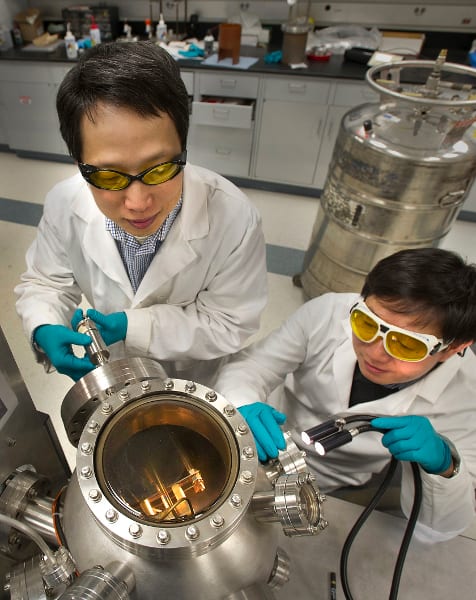 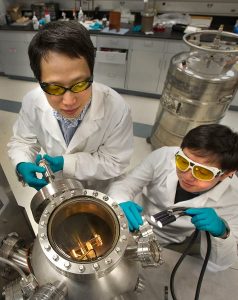 Brookhaven physicists Weidong Si (left) and Qiang Li look into the vacuum chamber where the new high-field iron-based superconductors are made through a process called pulsed-laser deposition.

The road to a sustainably powered future may be paved with superconductors. When chilled to frigid temperatures hundreds of degrees Celsius below zero, these remarkable materials are singularly capable of perfectly conducting electric current. To meet growing global energy demands, the entire energy infrastructure would benefit tremendously from incorporating new electricity generation, storage, and delivery technologies that use superconducting wires. But strict limits on temperature, high manufacturing costs, and the dampening effects of high-magnetic fields currently impede widespread adoption.

Now, a collaboration led by scientists at the U.S. Department of Energy’s Brookhaven National Laboratory have created a high performance iron-based superconducting wire that opens new pathways for some of the most essential and energy-intensive technologies in the world. These custom-grown materials carry tremendous current under exceptionally high magnetic fields—an order of magnitude higher than those found in wind turbines, magnetic resonance imaging (MRI) machines, and even particle accelerators. The results— published online January 8 in the journal Nature Communications—demonstrate a unique layered structure that outperforms competing low-temperature superconducting wires while avoiding the high manufacturing costs associated with high-temperature superconductor (HTS) alternatives.

“With the focused effort of this collaboration, we made a major breakthrough in iron chalcogenide-based superconducting films that not only sets the record for maximum critical current under high magnetic fields, but also raises the operating temperature for the material,” said Brookhaven Lab physicist Weidong Si. “That could mean conducting more electricity in a wide range of technologies while potentially using less energy to cool down the superconducting wire.”

Copper-oxide (cuprate) high-temperature superconductors are a leading candidate for advanced energy applications, but these ceramic-based materials are very brittle and require a complicated and expensive multilayer synthesis process. Beyond that, anisotropies—structural asymmetries that prevent current from flowing evenly in different directions across a material—limit overall efficiency in these compounds.

Iron-based superconductors, however, are mechanically semi-metallic and therefore considerably less fragile. They can also be more easily shaped into the kinds of long wires needed in devices like massive offshore wind turbines, and they exhibit nearly isotropic behavior in magnetic fields, which allows for easier technology integration.

The scientists synthesized this novel film of iron, selenium, and tellurium to push existing performance parameters. In addition to the raw materials being relatively inexpensive, the synthesis process itself can be performed at just half the temperature of cuprate-based HTS alternatives, or approximately 400 degrees Celsius.

The team used a thin film fabrication technique called pulsed-laser deposition, which uses a high-power laser to vaporize materials that are then collected in layers on a substrate. This complex technique is a bit like carefully collecting the gas as it rises above a boiling pot, only with nearly atomic-level precision.

“A key breakthrough here is the discovery that adding layers of cesium-oxide in between the films and substrates dramatically increased the superconductor’s critical current density, or maximum electricity load, as well as the critical temperature at which the material becomes superconducting,” said Brookhaven Lab physicist Qiang Li, head of the Advanced Energy Materials Group and leader of this study. “That critical temperature threshold rose 30 percent over the same compound made without this layering process—still a very cold -253 degrees Celsius, but it promises significant application potential.”

When tested, the critical current density of the new iron-based superconductor reached more than 1 million amperes (amps) per square centimeter, which is several hundred times more than regular copper wires can carry over the same area. Under an intense 30-tesla magnetic field, the film carried a record-high 200,000 amperes per square centimeter. For scale, consider that household circuit breakers usually blow when hitting just 20 amps.

In devices such as MRIs, using electricity to generate powerful magnetic fields is essential, and the magnetic tolerance of the superconducting wires must be high. The thin films in the new study remained functional under that 30-tesla magnetic field, while most hospital MRIs require just 1-3 tesla.

The researchers extended the study to include thin films grown on flexible metallic materials called rolling-assisted biaxial textured substrates, or RABiTS. These substrates, developed in a proprietary process invented by scientists at DOE’s Oak Ridge National Laboratory, offered a similar performance with particularly important implications for long-length scaled up production in the future. The scientists also used scanning electron microscopes to probe the structure of the thin films and conducted x-ray diffraction tests at Brookhaven’s National Synchrotron Light Source to further characterize the materials.

“We believe both critical current and transition temperatures can be further improved as we fine-tune the structure and chemical composition,” Qiang Li said. “The next step is to pinpoint the mechanism behind the findings—the relationship between the structure and properties—which will provide guidance for the discovery of new superconductors with even greater performance.”