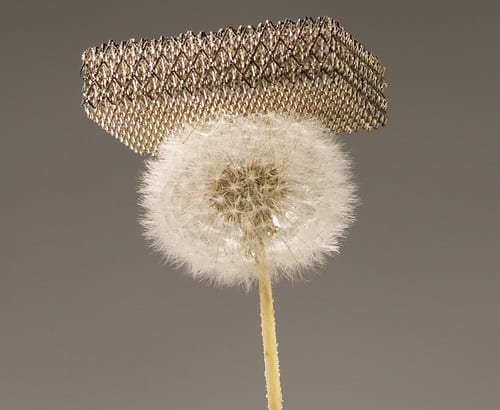 Airlines’ largest operating expense is fuel. Thus, weight savings are crucially important in aircraft manufacturing, since a lighter aircraft requires less kerosene. The Boeing 787 Dreamliner was a breakthrough commercial jet as it used light-weight composite carbon fiber material, rather than aluminum, to generate the best fuel efficiency in its class. 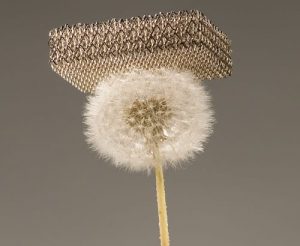 The HRL Laboratories attracted worldwide attention by announcing that they had developed the world’s lightest material in collaboration with Cal Tech and UC Irvine. The researchers created a microlattice structure of interconnected hollow tubes with a wall thickness of 100 nanometers. HRL Malibu, California/ USA is a corporate research-and-development laboratory owned by Boeing and General Motors.

The novel microlattice looks like a sponge or a mesh, and is simultaneously flexible and very strong. Boeing describes the new microlattice as an “open cellular polymer structure”. The main use of the material would be structural components, such as sidewall or floor panels of commercial jets. Should it become widely used, Boeing told the innovative material could help airlines save huge amounts of money.

The microlattice weighs only about one tenth as much as carbon fiber, and is actually slightly lighter than air itself, said Bill Carter, the director of the Sensors and Materials Laboratory at HRL.

He told that it will likely first be used on space rockets, Boeing plans to build in about five years, and it should make its way into commercial planes about five years after that. The cost of manufacturing, however, will have to come down a little more before it is economically feasible to use on cars.