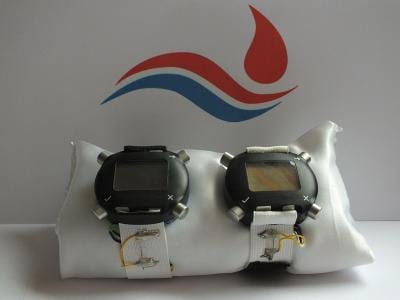 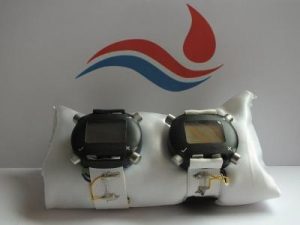 These are the initial prototypes of the “blood pressure watch” with the Empastrap made from piezo-resistive fibres. Empa.

Measuring and monitoring blood pressure is a tedious business for patients. It usually involves a cuff which is activated every 15 minutes over several hours and compresses the upper arm, a cumbersome measuring device on the body, or in some cases even invasive monitoring, in which a catheter is inserted into the artery. It is no wonder that those affected avoid this procedure if at all possible.

A new sensor hardly bigger than a wristwatch should soon offer a more pleasant method for measuring blood pressure. The company STBL Medical Research AG (STBL) has developed a device that can be worn comfortably on the wrist and records the blood pressure continuously – with no pressure cuff or invasive procedure. The measurement is carried out by several sensors which simultaneously measure the contact pressure, pulse and blood flow on the surface of the skin in the vicinity of the wrist. Michael Tschudin, co-founder of STBL, sees great potential for the device: “This measuring device can be used for medical purposes, for example as a precaution for high-risk patients or for treating high blood pressure, but also as a blood pressure and heart rate monitor for leisure activities and sports as well as for monitoring fitness in high-level sports.”

The fibers for measuring contact pressure are produced at Empa. A constant current flows through the individual fibers; if the fibers stretch, their electrical resistance changes. Empa

Engineers had one particular obstacle to overcome in this new technology: the pressure of the device on the skin changes constantly, meaning that highly sensitive correctional measurements are necessary. Empa’s Laboratory for High Performance Ceramics sought a suitable solution to this problem within the scope of a CTI project. A sensor made from piezo-resistive fibres in the wristband measures the contact pressure of the device on the skin. Changes in signal strength due to slippage or muscle tension could lead to incorrect measurements. It is these changes that the Empa sensor registers – enabling the measurements to be corrected accordingly. The fibre is electrically conductive, detects any movement or change in pressure, converts this into an electrical signal and transmits this to the measuring device. This enables the measuring accuracy of the “blood pressure watch” to be increased by more than 70 per cent. “Four years ago, we produced the first prototype,” says Doctor Frank Clemens of Empa’s “Laboratory for High Performance Ceramics”. Since then, relevant tests have confirmed the functionality of the sensors. Empa is now working flat out to integrate the piezo-sensor into the device in a way that is not only more attractive; it should also be easy to install without too much effort. Possible methods include glueing, laminating or weaving it in.

Emergency assistance on your wrist

The market for a device of this type is enormous. Cardiovascular diseases are the most common cause of death worldwide. More than a billion people should be measuring their blood pressure daily in order to avoid the possible consequences of hypertension. As a result, around 60 to 70 million measuring devices are sold annually – however, these do not allow continuous measurement. In contrast, constant measurement could provide additional safety margins; in cases where there is a possibility of an imminent heart attack or stroke, the system could give early warning signals. This is because a heart attack, like a stroke, is preceded by an increased pressure wave, which the system records and analyses. This would enable emergency measures to be taken before anything more serious happened. In order to constantly improve accuracy during such events, further test runs on humans are planned.

However, constant measurement offers additional advantages, as Professor Thomas Lüscher, Director of the Clinic for Cardiology at the University Hospital Zurich and co-founder of STBL, explains: “It gives us the opportunity to record blood pressure in the patient’s natural environment. The patient is not limited in terms of his freedom of movement.” The “fear of white coats”, i.e. nervousness of the patient around doctors, which can distort measurements, is eliminated with the new method.

Clinical trials are currently under way. The first measurements have already been taken in parallel with a catheter procedure – with very promising results. The product should initially be supplied in two versions: a medical monitoring device and a “slimmed down” version for leisure use by sportsmen and women and ordinary people. “The sensor will be cheaper than existing 24-hour monitoring devices, such as those currently used in hospitals”, confirms Tschudin. Such devices cost up to 6,000 Swiss francs, the “blood pressure watch” around ten times less.