Polyelectrolyte microcapsules as large as four microns can be ingested by cells, leading to impairment of cell functions. 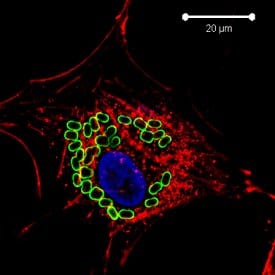 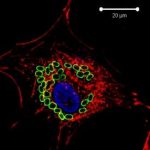 Polyelectrolyte microcapsules have been widely used in biomedical areas as novel drug delivery carriers and diagnosis probes for diseases. However, biological processes involving these capsules, such as their internalization or their influence on cell functions, which are of paramount importance for intracellular drug delivery, have not yet been fully investigated.

Changyou Gao and co-workers (Zhejiang University, Hangzhou, China) have now reported that microcapsules as large as four microns could be easily ingested and accumulated by human smooth muscle cells (SMCs). Using GeneChip technology, the researchers discovered significant alternation of the pattern of gene expression, suggesting substantial and profound alternations of cell phenotypes and functions. Although the cell was still largely viable, the cell cytoskeleton organization and cell cycle were influenced by ingestion of the microcapsules. Ingestion also largely impaired the cell adhesion and migration ability, further demonstrating the side impacts on cell functions.

This study provides deep insight understanding of the interactions between cells and capsules from cellular and molecular levels, suggesting that more careful and elaborate studies should be implemented on assessing the biosafety and biocompatibility of colloidal particles.

Inspired by the pufferfish, this hydrogel purifies water using nothing but sunlight
Reviewing the Decision-Making Behavior of Irrigators
How a Rhode Island-sized crack appeared in the thickest Arctic ice
How Can Zoning Limit Flood Damage?