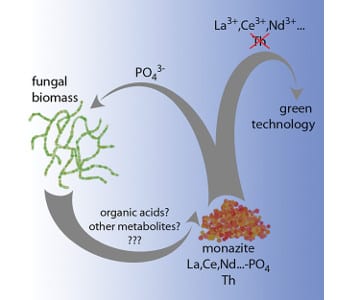 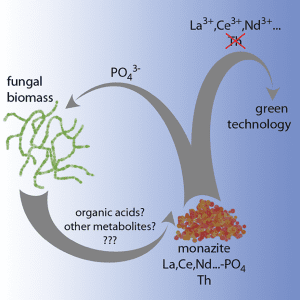 In this new study, Vanessa Brisson and Lisa Alvarez-Cohen from the University of California, Berkeley, CA, USA, and Wei-Qin Zhuang from the University of Auckland, Auckland, New Zealand, investigate bioleaching of rare earth elements (REEs) from monazite sand as a potential alternative to conventional extraction.  They characterize the bioleaching performance of two newly isolated fungal strains, an Aspergillus terreus strain ML3-1 and a Paecilomyces spp. strain WE3-F, along with one strain from a culture collection, phosphate solubilizing fungus Aspergillus niger ATCC 1015.  They first cultivated the fungal strains in the medium containing monazite to achieve bioleaching. The supernatants from all three strains were then collected for the following abiotic leaching experiments, where they were compared to the leaching by hydrochloric acid and organic acids. The cell-free spent media from the two newly isolated strains leached rare earth elements to concentrations 1.7–3.8 times those of HCl solutions of comparable pH, indicating that organic compounds excreted by these organisms in the presence of monazite sand played crucial role in leaching. Organic acids released by the fungi included acetic, citric, gluconic, itaconic, oxalic, and succinic acids. Bioleaching also preferentially releases REEs over radioactive Thorium, leaving Thorium in the solid residual.

REEs are increasingly of high value for a variety of technologies pertaining to consumer and portable electronics, and digital devices.  However, conventional chemical extraction of REEs from monazite, one of the main commercial ores used to obtain REEs, consume high amounts of energy and produce toxic waste streams. Adding to the problem of environmental pollution, monazite ore often co-occurs with a radioactive element thorium, which solubilizes into the waste water.  Therefore, the authors propose that the results of this study offer a promising environmentally friendly alternative to conventional REE extraction, and further study should be done to understand and optimize the bioleaching process.

A Whale of a Solution to Climate Change
How do nanoplastics affect crop yield and nutrition?
Creating millions of liters of aviation fuel from captured CO2
Investing in clean energy research: How likely are we to phase out fossil fuels?