The flies may be tiny, but they can teach us the greatest of lessons in cancer biology and beyond. 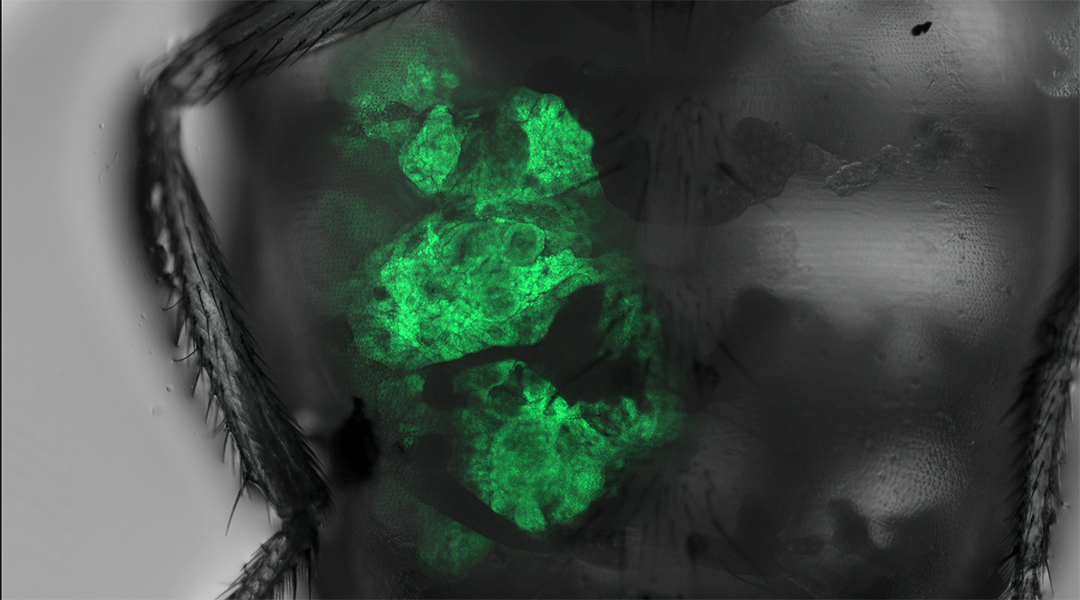 For well over a century, Drosophila melanogaster, also known more commonly as fruit flies, have contributed greatly to humanity’s quest to better understand processes in biology, physiology, and medicine.

Compared to mammals, fruit flies have very simple genetics, with only four pairs of chromosomes compared to the 23 found in humans. This helps scientists understand the interactions and pathways between different genes in a more straightforward manner. They are also very quick to reproduce — giving rise to a new generation of offspring every 10-12 days — and are economical to maintain. Typical research labs can upkeep millions of fruit flies regularly at a very reasonable cost and use them to perform dozens of experiments in parallel.

While all good points from an experimental point of view, how are fruit flies applicable in tackling human diseases? On the macroscopic level, there are of course very few similarities between us. However, after diving deeper into the molecular and genetic levels, researchers have found a staggering number of similarities that have paved the way for newer and better diagnostic and therapeutic techniques.

What jump started cancer research using fruit flies was the discovery of tumor suppressor genes, which are (in simple terms) genetic “stop signs” that can prevent the development of different cancers in their tracks by ensuring that tumor cells with abnormal DNA are destroyed before they can divide. However, when these stop signs are graffitied over, or biologically speaking, when these genes are damaged through mutations or interferences, they are no longer effective in preventing tumor cell proliferation.

Human equivalents of these fruit fly tumor suppressor genes were later found. As a result, certain etiologies of human cancers have since been identified to involve the mutation or suppression of tumor suppressor genes, such as breast and colon cancers. The use of fruit fly models can help identify more genes and molecular pathways relevant in the pathogenesis of cancer and give pharmaceutical researchers more targets to work with when designing therapies. In fact, fruit flies are already being used as mass-testing platforms for cancer drug therapies. Using these platforms, researchers can explore and predict the potential efficacy of the same medication on different cancers prior to starting clinical trials in humans.

A more recent development in the fruit fly models of cancer has been the study of the tumor microenvironment. Just like an ecosystem can positively or negatively affect an animals’ way of life, the tumor microenvironment is a spectrum of factors surroundings the cancer cell that may affect its growth and progression — and could provide clues or possible avenues that researchers could explore to treat cancer.

For example, in the fruit fly salivary glands there is an area called the “transition zone”, where two different types of epithelial tissue meet. This region was found to be particularly prone to cancer formation compared to other surrounding areas. When researchers stimulated cancer growth in the salivary glands, only this transition zone showed tumor cell proliferation.

This is analogous to a farmer spreading seeds evenly throughout an acre of land but only seeing crop growth in a particular area measuring five square feet. There must be something unique with the soil, right? Using this logic, researchers found certain factors, signals, and enzymes that were more active within the transition zone and contributed to this region’s vulnerability to cancer formation. For example, one of these enzymes helped to degrade the basement membrane that tumor cells sat on, thus facilitating their daring escape through tissue and eventual metastasis to other parts of the fly.

Such fly models help researchers better explore the underlying molecular mechanisms of cancer-prone transition zones that exist in humans, with the most prominent example being what is known as Barrett’s Esophagus. Here, the chronic irritation of esophageal surface cells from regurgitated stomach acid results in changes of the cellular microenvironment, leading to abnormal cell proliferation and increasing the risk for esophageal adenocarcinoma. The knowledge of cancer-prone transition zones also greatly contributed to the early diagnosis of cervical carcinoma. Commonly known now as the “Pap Smear”, regular screening of the cervical transitional zone with the Papanicolaou test have helped prevent up to 80% of cervical cancer related deaths in millions of women across the globe.

The studies of the tumor microenvironment and transition zones represent just a small subset of what Drosophila cancer research has to offer. These fly models have helped us understand, investigate, and conquer many other important challenges in biology and medicine over the past century.

The flies may be tiny, but they can teach us the greatest of lessons in cancer biology and beyond.