A new technology developed by FILK Freiberg and Fraunhofer IST allows production of films only 1 µm on PVC, which are effective barrier for plasticizers. 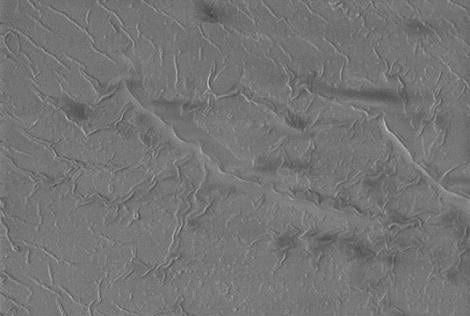 SEM image of siloxane based coating on PVC.

Polyvinyl chloride (PVC) is a widely used polymer due to its attractive price:performance ratio. PVC becomes an attractive base material for the manufacture of, for example, clothing, hoses, tubing, toys, flooring and cable insulation when it contains additional substances, so-called plasticizers, to make it sufficiently flexible and soft for these applications. The plasticizers often have, however, a tendency to migrate from the bulk of the PVC material to its surface and into the environment.

This is not desirable because the PVC products partly lose their desired processability properties, but also because some commonly used plasticizers, for example phthalates, are considered harmful to human health and the environment.

A new technology which has been jointly developed by FILK Freiberg and Fraunhofer IST allows the production of films as thin as one micrometer on PVC that nevertheless present an effective barrier for the plasticizers. The technology uses the fourth state of matter, a plasma, as a tool. The particular type of plasma used is a near-room-temperature ambient-pressure plasma that contains small additions of vapors or aerosols of film-forming agents, typically siloxanes.

After this plasma-based technology has matured it may well become an interesting ecofriendly alternative to existing solutions, among its relevant key features being the effective reduction of plasticizer leaching combined with the preservation of the processability.