Back to the Future – with Max Planck and Quantum Physics

A historic article by Max Planck, first published (in print) in 1901 has reached the top 5% of scores in Altmetrics.

“Altmetrics” – the impact assessment of scientific publications by counting news items, blog entries and the like is clearly an invention of the internet age, giving extra attention to some of the top research news of our time. On the other hand it is quite unlikely that historical content from earlier centuries would cause such a “blast from the past” – like, in this case, to the top 5% of scores a few days ago. So improbable that the Altmetric webpage is obviously unable to properly display the publication date of a historic article by Max Planck, first published (in print) in 1901 and online as part of the physics backfiles of Wiley Online Library in 2006. It therefore erroneously states this paper a work to be published in “February 2037”. 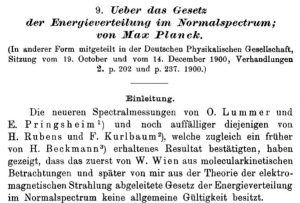 But leaving this technical limitation aside, what is the reason for this sudden attention to the long archived body of the scientific literature? The German-language article “Ueber das Gesetz der Energieverteilung im Normalspectrum” (on the energy distribution law of the normal spectrum) is usually considered to be the birth of quantum theory, one of the foundations of modern physics and, as such, a cornerstone of our view of the world today. Max Planck first presented his work, the famous description of blackbody radiation, in a session of the German Physical Society exactly 116 years ago, on 14 December 1900. This anniversary caused the Max Planck Society to send a tweet, retweeted in English by the Nobel Foundation and more than 160 other users so far! One more innovative recognition of these achievements and the importance of quantum physics for modern science.

“Quantum” will certainly remain a buzz word in Annalen der Physik for the foreseeable future, judged solely from looking at various recent special issues such as Quantum Simulation, Quantum and Hybrid Mechanical Systems, Complex Quantum Systems, forthcoming in 2017: Quantum Dynamics: Exploring the Extremes, and, perhaps in the near future, topics around Quantum Technologies. For these promising fields the European Commission has recently decided to launch a new Flagship, to support and expand research and development activities in Europe, as is already happening through similar initiatives in other parts of the world. Several of the Annalen Editorial Advisory Board members are strongly involved in these areas, so we should look forward to further coverage – standing on the shoulders of giants like Max Planck and promising an even brighter future for the quantum arena.

The bricks and mortar of energy storage
Mimicking the Motions of the Multitalented Octopus
The right materials are essential to the design of future fusion reactors
Paul Meredith: "I’ve never seen what I do as work"