A new class of soft actuators based on the auxetic behavior of patterned cylindrical shells containing a layout of voids that can be designed to reversibly achieve flexural or twisting motion is presented. 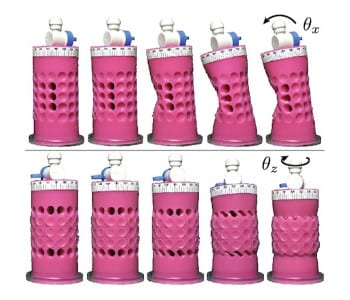 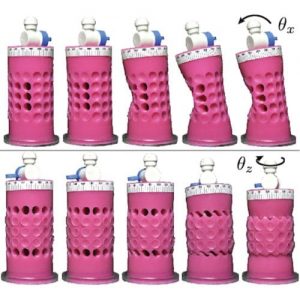 When compared to traditional robots made from rigid parts, soft robots that are based on compliant materials provide new capabilities, such as enhanced flexibility, dexterity and environmental adaptability. A variety of mechanisms have been explored for soft actuation; however, to date, realizing soft structures with distributed deformation, such as in the arm of an octopus, remains challenging given the large number of embedded activators required to modulate such a motion.

In new work, Lazarus and Reis introduce a novel design to passively actuate flexural and twisting motion in soft cylindrical shells that are structured with a regular pattern of voids. Decreasing the internal pressure of these structures allows for reversible control of the resulting motion, on demand. Below a critical pressure, there is cooperative local buckling of the thin ligaments that neighbor the voids, which themselves can be selectively plugged with inclusions. A void with (or without) an inclusion is regarded as a mechanical pixel, or mexel, that can be off (or on) to preclude (or enable) local buckling. The deformation of the underlying substructure causes localized contraction, which can be modified by the layout of mexels. In turn, this leads to global buckling of the sample that can be modulated to target specific modes of deformation. Precision model experiments are used to explore the mechanical response of the soft structured cylinders and systematically study the layout of mexels that lead to stable flexural and twisting motion. Given that the mechanism is primarily governed by the geometry of the design, the resulting modes of deformation should be readily scalable.