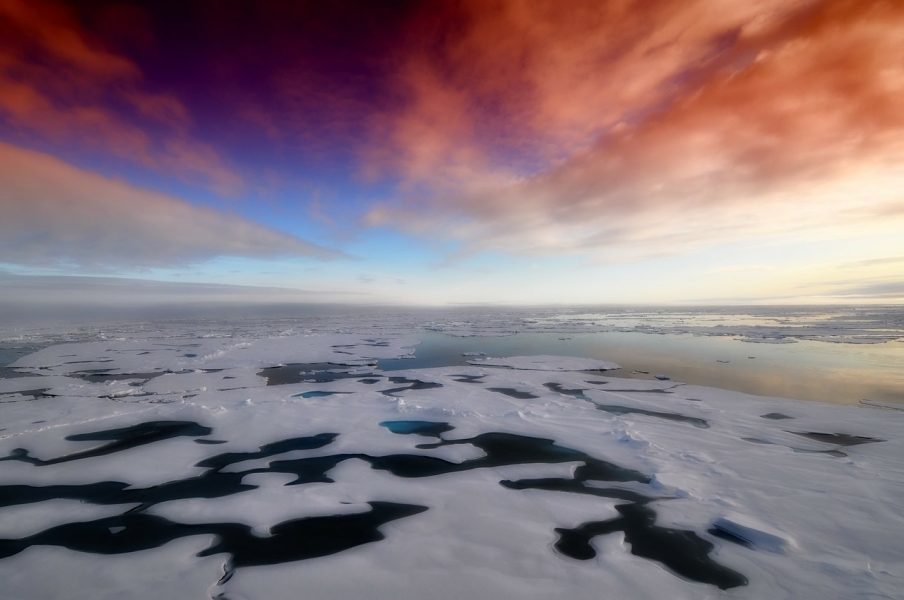 The long‐term decline in the annual mean Arctic Sea Ice Extent (SIE) is one of the clearest indicators of climate change, and certainly one that generates more scientific and social concern than most. The environmental implications of the retreat of the Arctic ice are of great importance, and the study of its causes and consequences encompasses a very broad spectrum of disciplines, including atmospheric and oceanic sciences, ecology, marine biology, and even economics and energy resources. 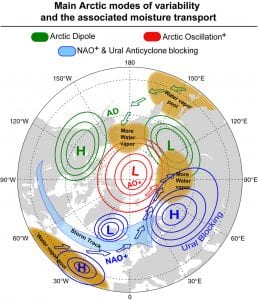 Major modes of climate variability that affect the Arctic region and their configuration associated with the greater transport of moisture toward the Arctic system.

The precise identification of the moisture sources for the Arctic depends on both the definition of the Arctic region itself and the approach used to identify the sources, with remote regions over the extratropical Atlantic and Pacific Oceans being universally important, as are some continental areas over Siberia and North America.

This review reaffirms the absence of any clear agreement regarding the trends in atmospheric moisture transport to the Arctic, and highlights discrepancies between different data sets and approaches in the quantification of moisture transport, implying that its long-term impact on the intensification of the hydrological cycle in the Arctic remains unclear.

The authors confirm the influence of the major modes of climate variability, planetary circulation patterns, and changes in cyclonic activity in the variability of moisture transport to the Arctic and reaffirms that the effect of moisture transport on the Arctic SIE through changes in humidity, cloud cover, and precipitation is a complex scientific problem that requires detailed analysis over the decades to come.

The Urgency of Climate Change
Climate predictions: Sometimes less is more
How do nanoplastics affect crop yield and nutrition?
Getting renewable energy in the sky with better aircraft designs