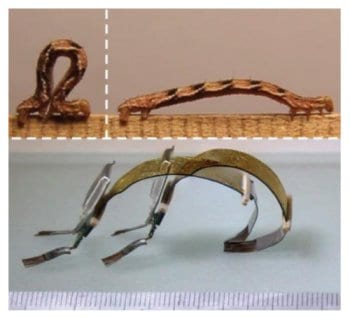 Smart-material actuators have been considered a promising advance in bio-inspired robotics almost since the beginning of their development. Recently, Indrek Must and co-workers from the University of Tartu developed a soft laminate that simultaneously functions as a high-efficiency bending actuator and a high-efficiency open-air supercapacitor. On one hand, the optimized laminate displays an exclusive combination of high electrically-induced strain and high bending modulus, and an outstanding electric capacitance per surface area on the other.

Ionic actuators have been considered promising for use in miniature biomimetic robotics for about two decades already; however, none of them have yet reached the necessary properties for application. At long last, this actuator designed meets all the requirements for use in soft robotics. The superior performance of this novel material is demonstrated by constructing a shape-morphing robot with an on-board power supply. The centimeter-scale and sub-gram robot is propelled by a single bending actuator, morphs its shape akin to an inchworm, and is even capable of carrying extra loads, heavier than the mass of the robot itself.