Whilst large-scale volcanic activity has been responsible for huge temperature rises millions of years ago, human-made climate change is happening at a far faster rate. 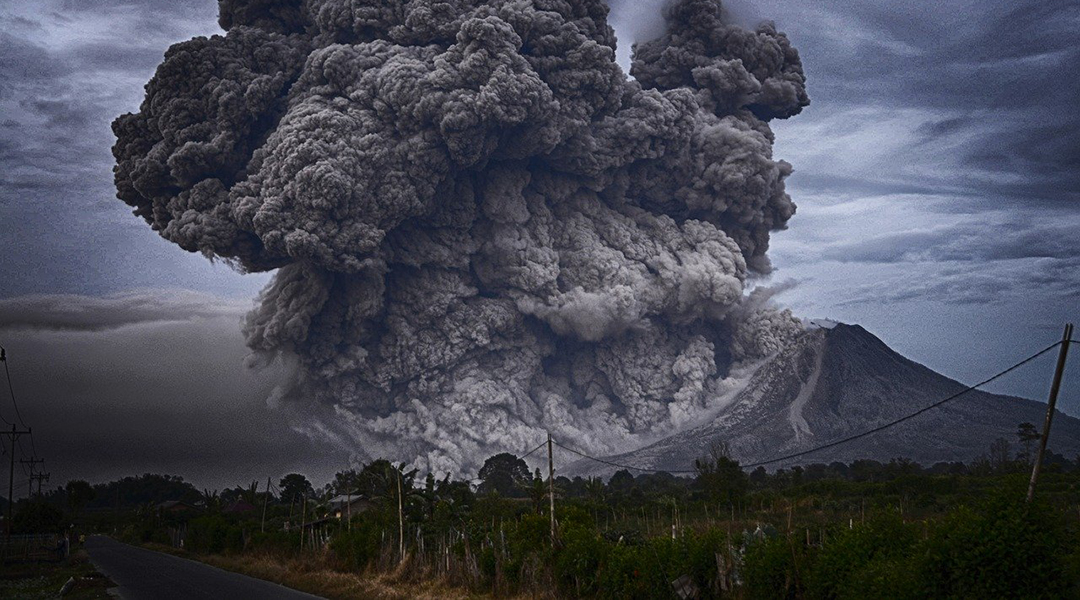 This week, Advanced Science News are raising climate awareness by highlighting scientific studies and articles related to climate change, sustainability, and efforts to move toward a net-zero future.

Rainforests in central Europe, mass animal migration to northern latitudes as the equatorial regions become unbearable for most mammals, mass extinction events in the oceans as intense acidification takes its toll, and subtropical climates in the polar regions, where crocodiles roam and glaciers never form. This may sound like a potential Earth a few thousand years from now, but this is a picture of the earth about 55 million years ago, during the Paleocene–Eocene Thermal Maximum (PETM), a geological period in which massive carbon emissions raised the global average temperature to about 5–8 °C warmer than it is today.

Whilst scientists often aren’t very good at coming up with catchy names for important events in the Earth’s history, they are very good at helping us understand our world today and what we can do to help our planet in the future. This help can sometimes come from looking back in the deep time of Earth’s geological past.

The PETM has been known about since the 1980s, and the cause has been attributed to huge releases of CO2 and methane. But what has been less known is what caused this carbon surge.

Now, researchers at Columbia University’s Lamont-Doherty Earth Observatory examined ocean conditions from 55.6 million years ago and found that extreme volcanism was the cause of this carbon surge. The oceans then absorbed this carbon, becoming more acidic, which had devastating effects on the marine ecosystem. But perhaps more worrying and relevant for our time was the pace at which this surge happened; this 5–8 °C increase in global average temperature was caused by carbon surges occurring over the course of 4000 to 5000 years. In contrast, humans have been pumping comparable amounts of carbon into the atmosphere over the course of mere decades.

“We want to understand how the earth system is going to respond to rapid CO2 emissions now,” said Laura Haynes in a press release, lead author of the study published in Proceedings of the National Academy of Sciences, and graduate student at the time of the research. She is now an assistant professor at Vassar College. “The PETM is not the perfect analog, but it’s the closest thing we have. Today, things are moving much faster.”

To get an accurate picture of the pace of change during the PETM, the team looked beyond the conventional method of boring into the ocean floor and analyzing its chemical make-up over geological time, and instead used a novel method of culturing single-celled organisms that were also known to exist in the PETM.

They studied organisms called foraminifera. These shelled microorganisms were around during the PETM, and are thought to have suffered a mass extinction of about 30 to 50%. The foraminifera were cultured in seawater that was made to resemble the highly acidic conditions of the ocean during the PETM. They then recorded how the organisms absorbed boron into their shells during growth. Comparing these data with boron analyses from the fossilized shells of ancient foraminifera in ocean-floor cores that span the PETM, they could identify carbon-isotope signatures associated with specific carbon sources.

This innovative technique allowed the team to conclude that the majority of the carbon sources came from a protracted period of volcanic eruptions, most likely caused as the North Atlantic Ocean was opening up as Greenland and North America began to separate from the European landmass.

The effect on the oceans — higher acidity and subsequent marine extinction events — would remain for about 10 000 years, long after the carbon surge had subsided. All in all, this slow but cataclysmic period added about 15 quadrillion tons of carbon to the world’s oceans.

The difference today is that human activity has greatly accelerated a similar process. Greenhouse gas emissions have skyrocketed since the Industrial Revolution, and further still in the past 20 years. This pace of change is far out-stripping that seen 55.5 million years ago; the PETM saw at least a 5 °C rise in global average temperature over 5000 years. Today, the planet is on course, if we don’t stop it, to heat to 2.5 °C above the pre-industrial average by the middle of this century. That is, half the temperature rise seen during the PETM in just three centuries.

Indeed, this is exactly the concern of co-author of the paper, Bärbel Hönisch. “If you add carbon slowly, living things can adapt. If you do it very fast, that’s a really big problem,” she said, whilst also pointing out that even this slower pace of carbon emissions in the PETM still led to mass extinctions. “The past saw some really dire consequences, and that does not bode well for the future,” she said. “We’re outpacing the past, and the consequences are probably going to be very serious.”

We’ve been hearing dire warnings for two years now, and with the unprecedented wildfires in the western United States and stronger-than-usual hurricane seasons in the Gulf and eastern seaboard, the consequences of global warming are becoming ever-more part of our present rather than the near future.

The more we learn about the effects of climate change on prehistoric life, the better we can model the effects on current life and how to safeguard it. But the clock is ticking, and ticking much, much faster than the clock of geological time.