The energetic consequences of having iron, manganese or aluminum atoms sit at certain positions close to carbon are studied by performing first-principles quantum-chemical calculations. 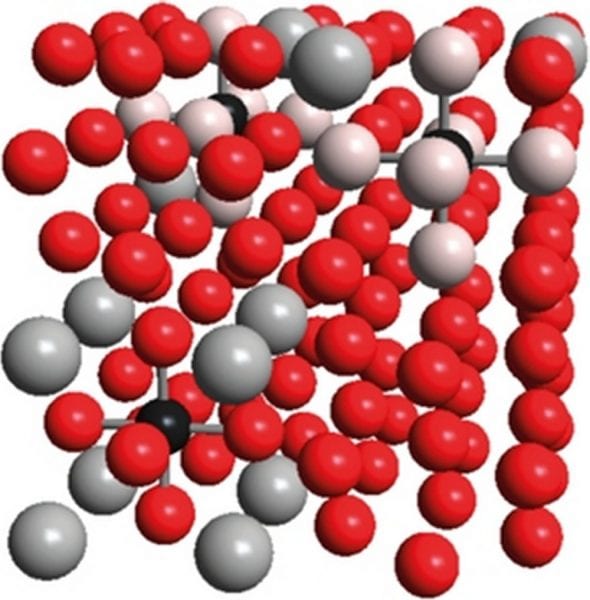 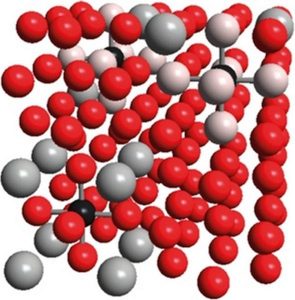 When it comes to developing advanced steels, for many years people have been focusing on iron-based alloys containing manganese, aluminum, and carbon, simply because of their remarkable strength and plasticity. What do we know about these materials? At room temperature, the onset of ferromagnetism is intimately linked with  iron adopting the so-called α structure in which the atoms are not densely packed. Adding small amounts of manganese, however, leads to the formation of the practically nonmagnetic γ phase which is otherwise stable at elevated temperatures. Here, the metal atoms are closely packed such that each atom is surrounded by 12 metal neighbors. As carbon atoms are much smaller than iron or manganese, they fit into the cavities of the γ structure where they experience six metal neighbors forming a regular octahedron, either iron or manganese. Up to the present day, no ordered arrangement of the iron and manganese atoms has been detected by employing crystallographic methods, so it seems reasonable to assume that these atoms are fully disordered. Upon additionally introducing larger amounts of aluminum into the alloy, so-called κ-carbides are formed within the metallic matrix, and these consist of crystalline inclusions with the chemical formula (Fe,Mn)3AlC. Interestingly enough, quantum-chemical calculations indicate that carbon atoms prefer certain metal surroundings in the otherwise disordered iron-manganese alloy (see above), and such preference (or “affinity”) may lead to short-range (instead of long-range) ordering with respect to the metal atoms which are either “attracted” or “pushed away” by carbon. Indeed, both experiments and quantum-chemical calculations hint towards an energetically favorable formation of pairs of manganese and carbon atoms. It is even more important that certain materials properties – such as yield strength or stacking-fault energies – have been attributed to this affinity phenomenon. Hence, the structure on the atomic scale is mirrored by the macroscopic behavior as skillfully exploited, in the real world, by our engineers friends.

The story continues: beyond the 6 nearest metal neighbors around the carbon atom, there are 8 second-nearest and 24 third-nearest neighbors. The present work thoroughly studies, by performing first-principles quantum-chemical calculations, the energetic consequences of having iron, manganese or aluminum atoms sit at certain of the aforementioned positions close to carbon. With respect to manganese, we clearly find that manganese seeks the immediate but not the second-nearest neighborhood; a third-nearest maganese neighbor is energetically irrelevant. Aluminum, on the other hand, is strongly preferred as a second-nearest neighbor but strongly disfavored as a first- or third-nearest neighbor. Upon combining the manganese and aluminum interactions with carbon in atomic configurations containing all these elements in addition to iron, there is a considerable interdependence, either strenghtening or weakening certain interactions. Fortunately enough, all the observed effects of local ordering can be clearly explained by differences in chemical bond strengths as well as lattice relaxations. Because the calculated ordering energies are integrated into an improved model of short-range interactions around carbon in Fe–Mn–Al–C alloys, we predict the energetic course of carbon with varying structural configurations and different neighboring metallic elements. Hence, statistical models may now be safely built such as to predict material properties solely based on the alloy’s chemical composition, that is, without additional calculations.