The newly discovered auroral dunes appear as a green-tinged and even pattern of waves resembling a striped veil of clouds or dunes on a sandy beach. 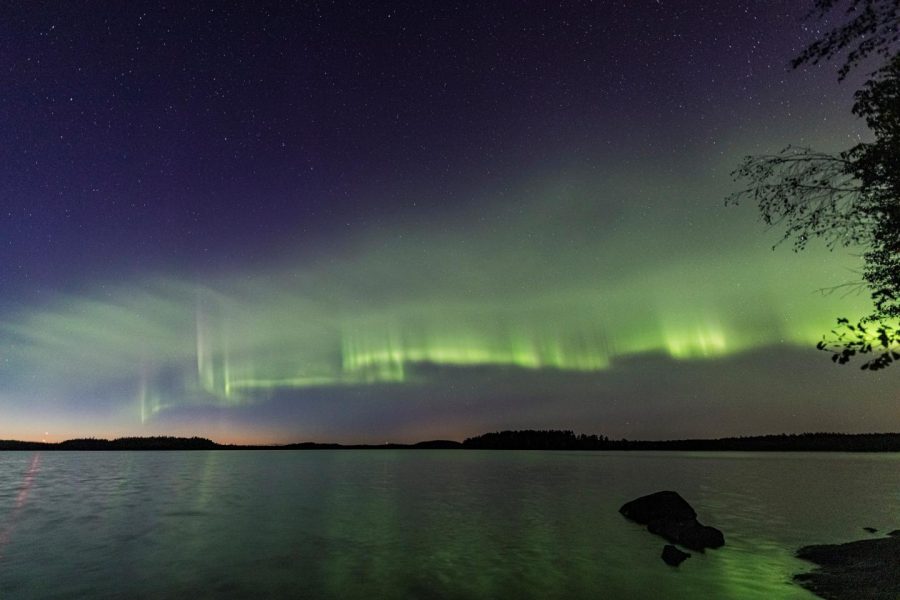 A new form of the northern lights has been discovered by amateur photographers in Finland working together with experienced researchers to classify the new phenomenon.

The bright dancing lights of the aurora borealis (and the aurora australis in the southern hemisphere) are the result of charged particles emitted by the sun — the so-called solar wind — colliding with gaseous oxygen and nitrogen particles located in the upper atmosphere at the Earth’s magnetic poles. These collisions result in excitations in the atom’s electrons, which release little bursts of light as they relax.

This new phenomenon in the aurora, named “dunes” by its discoverers, is believed to be caused by waves of glowing oxygen atoms formed in the mesosphere — the third layer of the atmosphere, directly above the stratosphere and directly below the thermosphere — and its boundary.

Minna Palmroth, professor of computational space physics at the University of Helsinki, became involved in the discovery after joining a Facebook group put together by hobbyists looking to learn more about the physics behind the Northern Lights. In 2018, Palmroth put together a book called Revontulibongarin opas (A guide for aurora borealis watchers) in which thousands of photographs taken by the amateur enthusiasts were categorized and the underlying physical phenomena explained.

But an unusual, recurring auroral form that contained distinct, green-tinged stripes did not seem to fit into any existing categories within the scientific literature. As a result, Palmroth and the hobbyists remained vigilant, and just days after their book was published, the new aurora made an appearance.

When the hobbyists first sighted it, they immediately informed Palmroth who was able to direct them in real-time, requesting specific photographs from two locations in southwest Finland.

“One of the most memorable moments of our research collaboration was when the phenomenon appeared at that specific time and we were able to examine it in real time,” says Northern Lights and astronomy hobbyist Matti Helin in a press release.

According to the team: “The form appeared as a green-tinged and even pattern of waves resembling a striped veil of clouds or dunes on a sandy beach.” Investigations into the phenomenon were launched, with hobbyist observations and scientific methods coming together to explain the waves.

“It was like piecing together a puzzle or conducting detective work,” says Helin. “Every day we found new images and came up with new ideas. Eventually, we got to the bottom of it…”

Palmroth and her colleagues were able to determine the altitude and extent of the auroral phenomenon using stars photographed behind the emissions as a point of reference.

The mesosphere is a difficult area to study as instruments such as weather balloons cannot fly high enough to reach it and satellites orbit directly above it. “Due to the difficulties in measuring the atmospheric phenomena occurring between 80 and 120 kilometers in altitude, we sometimes call this area ‘the ignorosphere’,” said Palmroth in a press release.

The dunes were measured in this region, which borders the edge of our atmosphere and space. The green color is produced by the excitation of oxygen, however, the even, dune-like waves posed a more complicated question.

The differences in brightness within the dune waves are likely the result of increased oxygen atom density, which form as a result of disturbances in the atmosphere, also known as gravity waves (not to be confused with gravitational waves). What is problematic is that at that altitude, there are many different kinds of gravity waves traveling in different directions at different wavelengths, which is why they do not easily form the even wavefields exhibited by the dunes, says Palmroth.

How then could such an even and widespread field of waves form?

The team of researchers suggest that the phenomenon is caused by a mesospheric bore, a rare and little-studied event though it is similar to what happens in tidal bores in tidal rivers. When gravity waves rise through the atmosphere, they are filtered and bent between the boundary of the mesosphere (called the mesopause) and an intermittently forming inversion layer — layers in the atmosphere where the temperature actually increases with height.

In the wave channel established between these two layers, gravity waves coming from below can travel long distances without subsiding. Dune-shaped auroral emissions are created when the solar wind charges the oxygen atoms surging through the channel (see figure).

Prior to this discovery, mesospheric bores were not observed in the auroral zone, nor have they been investigated via auroral emissions.

According to the team, the dunes were found to occur in the same region where the electromagnetic energy originating in space is transferred to the mesosphere. “This could mean that the energy transmitted from space to the ionosphere may be linked with the creation of the inversion layer in the mesosphere,” says Palmroth. “In terms of physics, this would be an astounding discovery, as it would represent a new and previously unobserved mechanism of interaction between the ionosphere and the atmosphere.”