Testing solar collectors from the Zugspitze to the Negev Desert

Researchers from the Fraunhofer ISE have been investigating the effects of extreme environments on solar collectors. 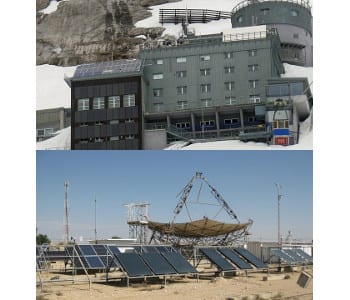 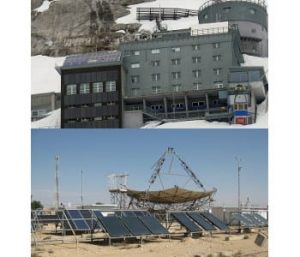 From the German Zugspitze to Israel’s Negev desert, researchers at Fraunhofer ISE are investigating the aging of solar collectors and components under extreme climate conditions. Image copyright Fraunhofer ISE.

For project developers and investors, it is strategically important that solar collectors are reliable even under extreme climate conditions. With this in mind, researchers at Fraunhofer ISE have developed tests to demonstrate the performance of solar collectors and components under such extreme conditions. The first results from the “SpeedColl” project will be presented at the 24th Symposium Thermische Solarenergie from 7–9 May 2014 in Bad Staffelstein.

Of all components in solar thermal systems, solar collectors experience the highest climatic and mechanical stress. They are subjected to high temperatures and, depending on the location, variable and extreme weather conditions. Just as coastal and sun-rich regions offer large potential for solar energy use, the systems installed in these areas are exposed to especially high levels of UV radiation, humidity and salt air. As a result, the collectors age and degrade faster. “Performing comprehensive R&D investigations at an early development stage is our expertise, with which we can assist the industry in ensuring the durability of solar collectors and their components over long periods of time,” explains Karl-Anders Weiß, Group Head of “Service Life Analysis” at Fraunhofer ISE. Together with the Institute of Thermodynamics and Thermal Engineering (ITW) at the University of Stuttgart and several solar collector and component manufacturers, Fraunhofer ISE is developing accelerated aging tests for solar collectors and components in the “SpeedColl” project, which is supported by the German Federal Ministry for the Environment, Nature Conservation, Building and Nuclear Safety (BMUB) and participating industry partners.

In “SpeedColl” actual environmental stress data such as humidity, UV radiation, temperature and salt concentration are determined. The data collection varies from tests carried out in alpine, moderate and maritime locations through to measurements in arid and tropical regions. Test stands are installed on the Zugspitze, the highest mountain in Germany, as well as in Freiburg, Stuttgart, Gran Canaria, the Negev Desert, and in India. In addition, the solar collectors and components undergo accelerated aging tests in the laboratory. Using the collected data, the researchers validate the procedures of the aging tests, which provide information about the collector’s thermal performance over its entire lifetime. The results also serve as a basis for standardization.

The tests performed on Gran Canaria proved to be especially fruitful. After one year of outdoor exposure, the researchers determined evidence of extreme corrosion caused by the environmental conditions. The quality of the tested solar collectors, however, remained nearly constant. “The location on Gran Canaria is predestined for testing collectors under the most demanding environmental conditions. Using the measured meteorological and material specific data, procedures can be developed for testing solar collectors at an early stage to determine their suitability for sunny regions with extreme climate conditions,” says Weiß. “For example, special salt spray tests and UV tests were developed, in which the specimens are exposed to different environmental influences in quasi-time lapse, effecting an accelerated degradation.” Natural weathering of the solar collectors and components and the accompanying measurements shall be continued under the auspices of this project up to 2015.