Glycerol polymers represent a major opportunity for replacing or complementing the current polymers used in the biomedical market. 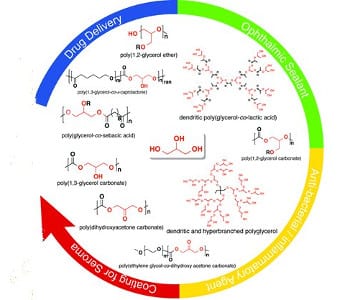 Glycerol is a well-known biocompatible and nontoxic natural metabolite. It offers a wealth of chemical diversity and opportunities for selective 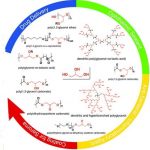 chemical reactivity and manipulation for being such a small molecule. Today, glycerol is chemically synthesized and it is also becoming a renewable raw material of ample supply due to the increases in biodiesel production. This large surplus of glycerol is fueling the production of downstream value-added products and stimulating research and development activities; such as glycerol polymers. During the past 15 year, remarkable progress has been achieved for glycerol polymers, which are attracting increasingly more attention for both fundamental studies and practical applications. Various structures and compositions are reported. With their efficient synthetic routes, diverse polymer architectures available, tunable physical and mechanical properties, biodegradability, and biocompatibility, glycerol polymers are actively investigated as drug delivery vehicles, tissue sealants, anti-bacterial or anti-inflammatory agents as well as for a number of other biomedical applications.

Mark W. Grinstaff and co-workers (Boston University, USA) now provide a chronological review on the developments in this important research area including the most recent and relevant examples.

In many ways, glycerol polymers are the next generation biodegradable polymers like the well-known PLA, first discovered in the 1960’s, but with all of its advantages and more. Coupled with the low cost, ample supply, bioavailability and renewability of glycerol, glycerol polymers represent a major opportunity for replacing or complementing the current polymers used in the biomedical market and making a difference in patient care.