This work involves measurement of adhesion rates for a particular volcanic ash in an experimental set-up based on a vacuum plasma spray facility. 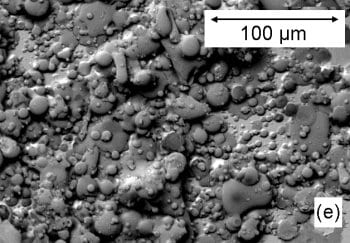 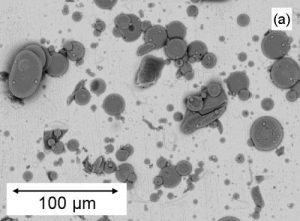 Gas turbines, particularly aeroengines, are susceptible to damage from ingested particulate, such as sand, fly ash and volcanic ash. Such damage is of two main types. Abrasive, high melting point particles (such as most types of sand) can cause erosive damage to metal surfaces and ceramic coatings. Potentially more deleterious, however, are particles that may melt, or at least soften, within the engine, making it likely that, on striking a solid surface, they will adhere to it.  Many volcanic ashes have low softening temperatures and hence are likely to adhere in this way.

This can lead (at relatively high levels) to disruption of gas flow, ranging from blockage of cooling channels to complete inhibition of air passage and combustion. At lower levels, short- or medium-term damage can be caused to protective ceramic coatings, often promoting spallation. This all depends on the likelihood of particle adhesion, with the sensitivity to this factor being much greater than that to the particulate burden of the ingested air. This can be seen by recognising that, even at the particle concentration currently classed as “safe” by the CAA (2 mg m-3), the ingestion rate for a large turbofan engine at full power is more than 1 g s-1. Since, even in a large engine, one gram of adhered particulate (~100 million particles of radius 10 µm) is likely to cause extensive damage, it is clear that the critical factor here is the proportion of ingested particles that adhere to solid surfaces inside the engine. 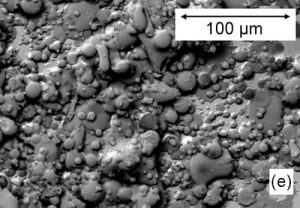 New work by T.W. Clyne et al. from Cambridge University involves measurement of adhesion rates for a particular volcanic ash (from the Laki eruptions in Iceland), in an experimental set-up based on a vacuum plasma spray facility in the Gordon Laboratory in Cambridge, which is the focus of a large consortium activity on developing protective measures against damage caused by volcanic ash. These measurements are correlated with numerical process simulation modelling, to identify the key factors that determine the likelihood of adhesion.

Particle size is important, with small (< several µm) particles unlikely to strike solid surfaces and large (> several tens of µm) particles unlikely to become sufficiently hot. As it happens, the size range most likely to adhere (~10-30 µm) is one with a high probability of reaching the turbine of an aeroengine. Another key parameter is the particle softening temperature. Most volcanic ashes have (crystal) melting temperatures of ~1100˚C, but they are often at least partially glassy, with glass transition (softening) temperatures ~600-800˚C. For Laki ash, Tg is about 700˚C and the modelling work has confirmed that the likelihood of adhesion goes up sharply as particles in the critical size range start to reach temperatures of this order, which will tend to occur quite readily in an aeroengine. This highlights the need to obtain information about the specific ash concerned when assessing the hazard associated with a particular volcanic eruption.