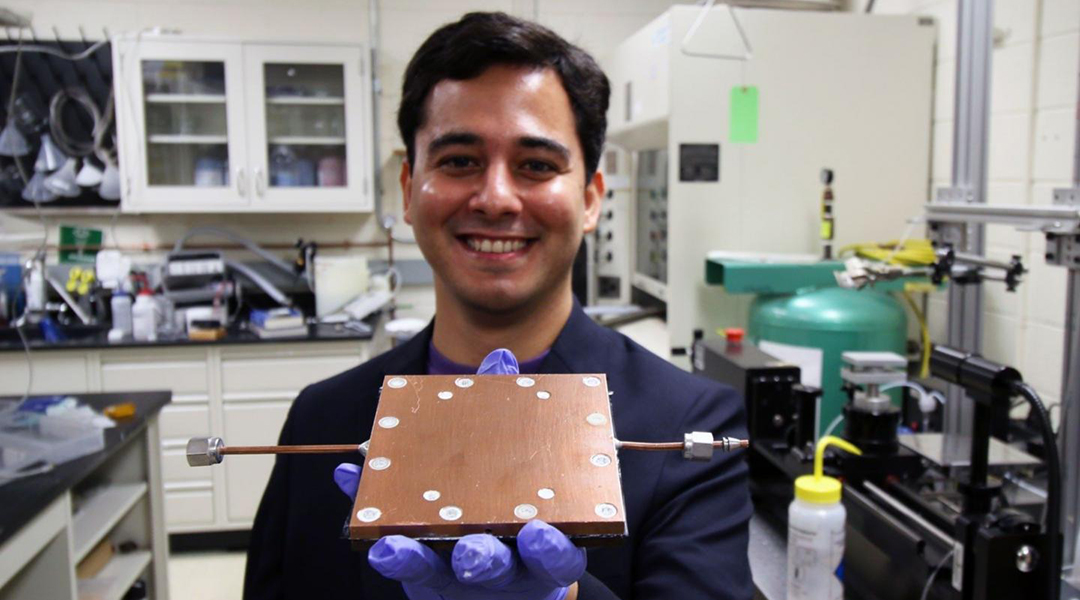 Diodes are semiconducting devices that help control the direction of heat or an electric current; more specifically, they function as a control switch that allows the current to flow easily in one direction while restricting it in the opposite direction. Thermal diodes are desirable for managing overheating in electronics as well as air- and spacecrafts as they can effectively dump heat while also shielding the system from external heat sources.

Boreyko’s diode uses two copper plates in a sealed environment, separated by a microscopic gap. The first plate is engineered with a wick structure to hold water, while the opposite plate is coated with a water-repelling (hydrophobic) layer. The water on the wicking surface receives heat, causing evaporation into steam. As the steam moves across the narrow gap, it cools and condenses into dew droplets on the hydrophobic side. These dew droplets grow large enough to “bridge” the gap and get sucked back into the wick, starting the process again.

If the source of heat were instead applied the hydrophobic side, no steam can be produced because the water remains trapped in the wick. This is why the device can only conduct heat in one direction.

What does this look like in practice? An object producing heat, like a CPU chip, overheats if this heat is not continually removed. Boreyko’s invention is affixed to this heat source. Generated heat is transferred through the conducting plate, into the water. Water turns to steam and moves away from the source of the heat. The hydrophobic, nonconducting side prevents heat from entering via the air or other heat sources that may be near, allowing the diode to manage the heat only from its main subject.

Boreyko’s team measured a nearly 100-fold increase in heat conduction when the wicked side was heated, compared to the hydrophobic side. This is a significant improvement to existing thermal diodes. According to Boreyko, current diodes are either not very effective, only conducting a few times more heat in one direction, or require gravity. This new bridging-droplet thermal diode can be used upright, sideways, or even upside-down, and would even work in space where gravity is negligible.

“We are hopeful that the one-way heat transfer of our bridging-droplet diode will enable the smart thermal management of electronics, aircraft, and spacecraft,” said Boreyko

Adapted from the press release provided by Virginia Tech