A new design for vanadium redox flow batteries could help fundamental research and accelerate commercialization of this energy storage technology. 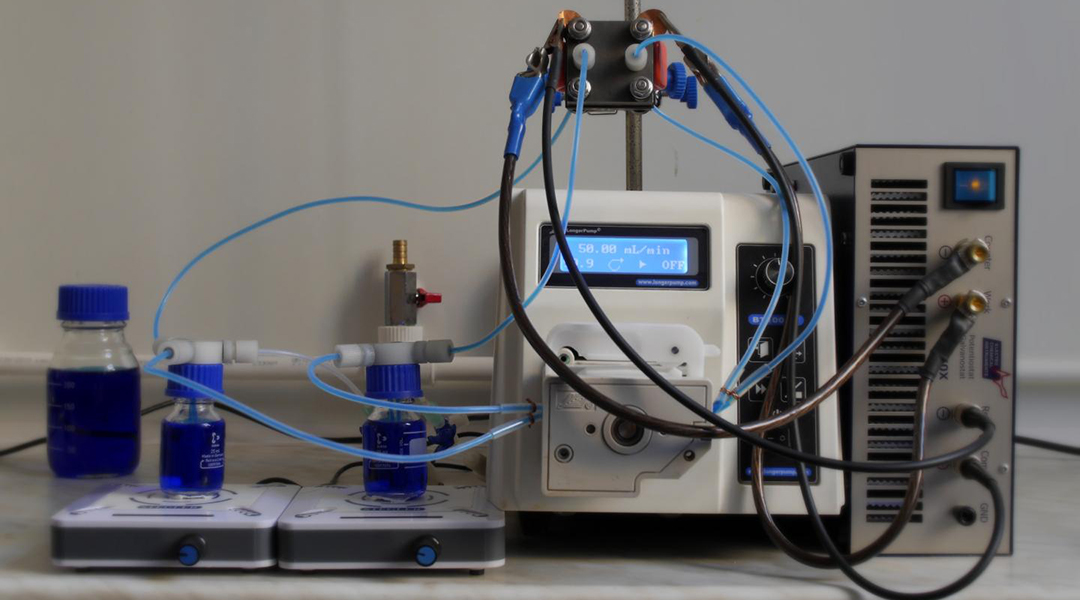 Within the realm of energy storage, redox flow batteries, in which energy is generated from recirculating liquid electrolytes, are rising stars with the promise of improved safety, power generation capabilities, and sustainability.

Since battery storage and output are dependent on the amount of electrolyte used, these batteries can be easily scaled to reach a desired output and charge capacity simply by changing the size of the electrolyte tank. Flow batteries also have the added advantage of minimal self-discharge or loss of energy over extended periods of time and their electrolytes don’t degrade.

The most studied and commercialized of this technology is the vanadium redox flow battery, which was developed back in 1986. Since then, more than 70 independent facilities around the world operate and supply energy to power grids using flow batteries, reaching hundreds of MW/MW*h of energy storage.

While their active integration is promising, there is still room for improvement. According to a research team led by Professor Roman Pichugov of D.I. Mendeleev University of Chemical Technology of Russia, their widespread distribution is still hindered by limitations in their performance parameters, such as power and discharge density, as well as the high cost of energy storage.

In a recent paper published in ChemPlusChem, the team proposes that a solution to these problems could be a new design. “We have proposed a completely new design of [membrane-electrode assembly], which will facilitate the research process and greatly reduce entrance threshold for new research groups into this area,” said Dmitry Konev, researcher at the NTI Competence Center at IPCP RAS and one of the study’s authors. “In the future, this will help to achieve significant progress and will bring distributed energy resources from niche positioning to very high level of commercialization.”

The membrane-electrode assembly is the heart of a flow battery and a key element to enhancing its power and efficiency. It is an assembled stack of ion exchange membranes, catalysts, and electrodes that oxidize one electrolyte while reducing the other to produce electrons and an electrical charge.

One important elemental component of the membrane-electrode assembly are flow field plates, which control electrolyte movement past the membrane’s electrodes. Optimizing flow fields can yield better battery performance, but selecting the correct materials and parameters is an intensive and time-consuming task.

In their studies, the authors describe the difficulty in comparing studies that seek to optimize battery parameters such as flow field type and electrolyte flow, which they attribute to minor differences in the configurations of battery test cells. This emphasizes the importance of experimentally determining optimal flow field selection through a systemic review. However, this is near impossible given that conventional flow fields are created in an expensive, intensive, and time-consuming process.

So the team proposed a different approach where conventional bipolar plates made from bulk graphite are replaced with multi-layer graphite foil sheets.

“We form flow fields by using several thin layers of flexible graphite materials: the necessary patterns are cut by a laser and then these layers are superimposed on each other to get the required field,” said Pichugov. “The procedure to create flow fields takes only a few minutes, which is much less than traditional milling of graphite. Plus, cheaper materials are used, and as a result, there is more scope for variation and selection of flow fields.”