Professor Ozin explores the repercussions of giving up our fossil fuel addiction. 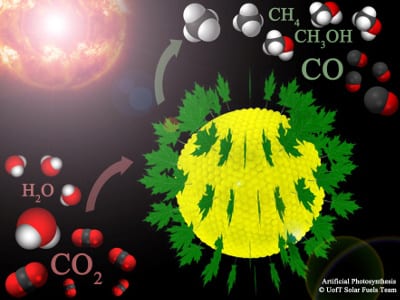 Imagine a time in the not-too-distant future when all our legacy fossil fuels have been depleted because of our incessant demand for energy and chemicals, obsession with consumerism and never ending drive for economic growth. Ignoring for a moment that a global catastrophe will almost certainly ensue, what will be left for our newly fossil fuel free society but carbon dioxide, the combustion product of our long-time addiction? And there will be plenty!

In a fossil fuel-free world it is unlikely that our global hunger for energy, chemicals, consumerism and growth will be satisfied by renewable sources of energy. So what choice will we have? I would suggest that we need to learn how to run the world in reverse: we need to make our carbon dioxide-rich atmosphere our source of fuels and chemicals. The sun then becomes our fusion reactor, the engine to sustain life.

In order to rise to the challenge of developing a global economy founded on carbon dioxide it is vital to get government, investment, and university and industry leaders, together with the public, to understand that carbon dioxide is not a waste product to dread. Instead carbon dioxide should be showcased as a feedstock for making fuels and chemicals, a bountiful resource of latent carbon spread uniformly around the globe. With the right chemistry it can be transformed into a boundless supply of carbon neutral renewable energy and chemicals to sustain and support a high quality of life for eternity.

This vision of carbon dioxide as the powerhouse that drives a new economy is based on artificial photosynthesis. This is the approach upon which a sustainable future could be founded. The support of the global community must be enlisted to make it happen.

Our journey to mimic nature has just begun. Imagine a carbon dioxide economy inspired by biological photosynthesis, a process honed to perfection over an evolutionary time scale. 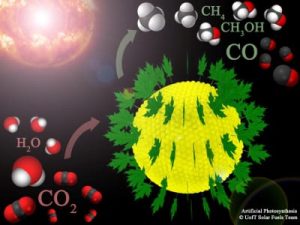 Illustration depicting how the leaf’s photosynthetic machinery for processing carbon dioxide, water and sunlight to solar fuels such as carbon monoxide, methane and methanol, is integrated into the nanoworld. Graphical illustration courtesy of Chexi Qian.

Copying the leaf is a most appealing vision, but it is not yet a reality. No material is known today that can use energy from the sun to convert carbon dioxide into a storable and transportable fuel or chemical feedstock at an efficiency that outperforms biological photosynthesis and a scale that can handle hundreds of billions of tons of carbon dioxide a year. This is a challenge for the global community, and it is incomparable in complexity and magnitude to any other faced before. The consequences of ‘willful blindness’ on climate change, namely ignoring the obvious perils of continuing to increase the concentration of anthropogenic carbon dioxide in our atmosphere, could be more deaths than all those caused by war, terrorism, famine, poverty and disease throughout the history of humankind.

The scientific challenge is to discover a class of materials made of earth-abundant, low cost, sunlight stable and non-toxic materials. Such materials would then be able to generate solar fuels and chemicals, such as carbon monoxide, methanol or methane, from carbon dioxide at a technologically significant rate and efficiency at global proportions.

If this Utopian dream is realized it will forever change the way we see carbon dioxide: instead of a foe, it will become our greatest friend. The development of a practical artificial leaf will in turn seed the development of a global CO2 economy that will provide a carbon neutral replacement for fossil fuels. Recycling carbon dioxide in our atmosphere and converting it to solar fuels and solar chemicals seems to be the only silver bullet solution to enable the human race to sustain its existence in a world depleted of fossil fuels.

What will it take?

As the debate over greenhouse gas emissions and climate change intensifies with no signs of consensus being reached any time soon, governments in the United States, Europe and Asia have already determined the value of investing considerable funds in artificial photosynthesis research and development.

An impressively large global network of scientists working on artificial photosynthesis through team science and collaborative research emerged in 2012. This network is composed of a dozen European research partners, including the Solar-H2 Network, supported by the European Union, and the Institute for Chemical Energy Conversion, a 100 million Euro foundation in Germany supported by Max-Planck Society. The US Department of Energy (DOE) Joint Center for Artificial Photosynthesis (JCAP), led by the California Institute of Technology (Caltech) and Lawrence Berkeley National Laboratory, has been awarded US$ 122 million over 5 years to demonstrate a scalable solar fuels generator using earth-abundant elements that robustly produces fuel from the sun at ten times the efficiency of current crops. Some Energy Frontier Research Centers (EFRCs) funded by the US DOE are focused on solar fuels-related endeavors, including the Argonne-Northwestern Solar Energy Research (ANSER) Center led by Northwestern University, the Center for Bio-inspired Solar Fuel Production (BISFuel) and Light-Speed Solutions and Light Works led by Arizona State University, and the Center for Solar Fuels led by the University of North Carolina. Other prominent international examples include the Energy Futures Lab at Imperial College London, the Australian Centre of Excellence on Electromaterials Science (ACES) Energy Research Program and the Solar Fuels Lab at Nanyang Technological University in Singapore. In Japan, the Advanced Low Carbon Technology Research and Development (ALCA) project aims to produce a carbon-free fuel based on hydrogen peroxide. In South Korea, the Pohang Steel Company is contributing to the Korea Center for Artificial Photosynthesis (KCAP). In China, the first national lab for clean energy research has been set up with the broader mission of also reducing carbon emissions. 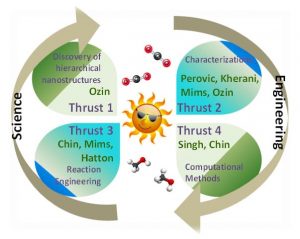 At the University of Toronto a multidisciplinary solar fuels team was founded in 2012 and has been investigating a portfolio of nanostructured materials that are active for the gas-phase photo-reduction of carbon dioxide to solar fuels like carbon monoxide, methane or methanol.

The focus of the team’s research on a gas-phase process is predicated upon their collected belief that the development of a global scale process capable of handling hundreds of billions of tons of carbon dioxide annually, which would represent the largest chemical factory ever on earth, for a host of practical and economical reasons is unlikely to work in aqueous solution.

To embrace all aspects of the problem the expertise of the University of Toronto solar fuels team has been designed to crisscross the borders of experimental and theoretical materials chemistry and nanochemistry, chemical, materials, and optical and photonic engineering. Our collective skill-set and know-how enables us to effectively collaborate on the grand challenge of how to discover a champion artificial photosynthesis material that can transform gaseous carbon dioxide at a technologically meaningful efficiency and scale.

The thrust of our research is to understand at a fundamental level the relations between the synthesis, composition, structure and properties of champion nanostructured materials that confer upon them the capacity to function as efficient gas-phase carbon dioxide photocatalysts.

All of our experiments employ the full gamut of diffraction, microscopy, spectroscopy, electrical, optical, thermal and adsorption analytical techniques to define structure-property relations of photocatalysts. We use isotope-labeled reagents to identify reaction intermediates and products, to elucidate kinetics and mechanisms, and to distinguish real products from artifacts arising from ubiquitous carbon contamination problems.

With this knowledge, photocatalytic conversion rates and efficiencies of materials can be engineered from a laboratory prototype and optimized to a technologically important archetype able to make solar fuels from carbon dioxide and sunlight at a globally significant scale.

We are all Passengers on Spaceship Earth

It is clear from all the research activity on artificial photosynthesis that scientists understand the urgency of learning how to harness the energy of the sun to transform carbon dioxide into a renewable source of energy and chemicals to sustain life on earth. An equally important challenge is to change the perception of policy makers and the public in the fastest and most effective ways. We need to convince the world that carbon dioxide is a friend not a foe and can be used to carry and sustain our way of life long after the fossil fuel reserves have dried up.

By working together as a global community on the science and technology of artificial photosynthesis, carbon dioxide could be our savior rather than our downfall in the fossil fuel free world of the future.

Last year the International Energy Agency cautioned that a third of the world’s fossil fuel reserves must be put off limits until 2050 if humanity is to stand a chance of avoiding catastrophic climate change.

In this context it is worth noting that a recent report claimed if governments ever issued an edict to curb the use of fossil fuels because of climate change it could put $6 trillion in fossil fuel reserves in jeopardy.

In this scenario it has been estimated that a number of oil behemoths could lose up to 50% of their market value and trillions of dollars in revenues. Investors are rightly concerned about the risks associated with multinational oil, coal and gas companies that could be left with trillions of dollars of stranded assets if carbon taxes and other emission limits reduce the demand for fossil fuels. Why, then, would they invest in climate catastrophe?

In a fossil fuel world whose unmitigated freedom to operate as usual is curtailed by the threat of climate devastation, a carbon dioxide economy based on artificial photosynthesis can come to the rescue not only to the benefit of all those who believe and invest in the initiative, but also to sustain the health and well-being of humankind.